A machete is a large ax or cleaver with a single edge used on agricultural fields. Fundamentally, it is a short sword that has a good balance towards the tip.

Different versions of this tool, along with a variety of blade types are found across the planet. Originally, machetes were used primarily for agriculture and survival. However, historically these are also used as deadly weapons.

You can use a combat machete as a fighting weapon to slash, stab, pierce, and hack. Its relatively lightweight build and small size add to great speed performance, while the broad blade end renders more cutting power. However, do not expect it to help you in blocking and parrying, unlike a sword. 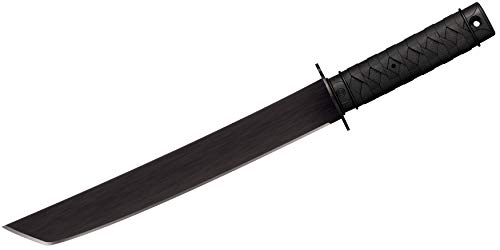 This tanto machete is no exception. It is quick to operate and feels lively when held in the hand, due to which it acts as a remarkable slashing blade and commendable chopper. However, its most successful feature is the reinforced tip that pierces and penetrates almost any impediment in its path and aids in performing utility jobs in the absence of a smaller blade.

This distinct machete comes with a tsuba (handle) and a 13-inch blade featuring a wide, curved tanto point, all made using 1055 high carbon steel having an anti-rust coating. Thus, you are ensured of great edge retention and corrosion resistance.

The injection-molded wide full tang is composed of high impact polypropylene, due to which the machete is extremely tough and weather-resistant, contributing to a secure grip.

The handle is a recreation of the conventional Fuchi and Kashira cord-wrapped handles. It is made using a durable polypropylene material that is resistant to rotting, tarnishing, and warping. It also requires little maintenance.

The machete comes with a Core-Ex sheath that too reflects a tactical design for adding to the safety and ensuring carrying convenience. 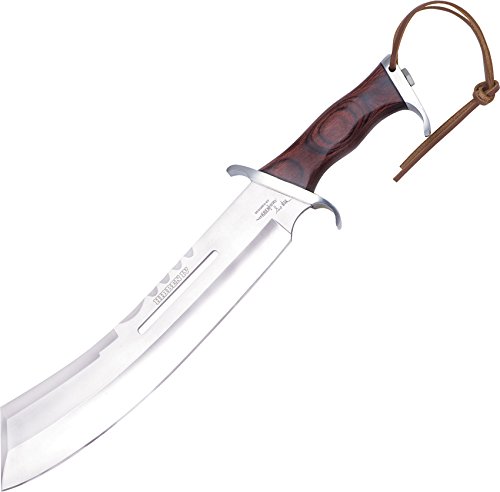 Renowned across the globe, this combat machete is undoubtedly the most popular companion to encounter and slay down opponents in combat situations. It is durable and safe to use even in the harshest conditions, due to which it is in use on battlefields or woodlands for survival.

Gil Hibben is known to make some of the sophisticated, stylish, and quality combat machetes. This combat machete is certainly one of them. It has been used in Commando and Rambo films, which says a lot about its performance.

Measuring 16 inches in length, this machete is quite long. However, this size wins the hearts of the professionals who tend to experience its top-level performance.

The blade measures 11.25 inches and is made using 440 stainless steel, a material known for its sharp edge retention ability, high strength, good hardness, good resistance to wear, and moderate corrosion resistance. This blend of features makes this machete one of the lasting combat machetes.

The blade features the Wharncliffe style, which is similar to the sheepsfoot style but with the curve extending to the tip from the handle. A perfectly straight and long edge is capable of cutting the targets deeper without snagging on clothing or taking more energy.

The hardwood handle with a lanyard cord is comfortable and ensures a solid grip. The machete also comes with a sheath made using grain leather, due to which it can absorb shock and resist heat. It covers the blade fully and makes it easy to carry. Moreover, the blade is set in through the handle to deliver balanced and tough strokes.

This machete is also an excellent chopper to work not only on tall trees or large grass but also on big strong trees. It behaves truly like an ax. This full-tang machete is truly a solid value addition to the existing collection of your machetes. 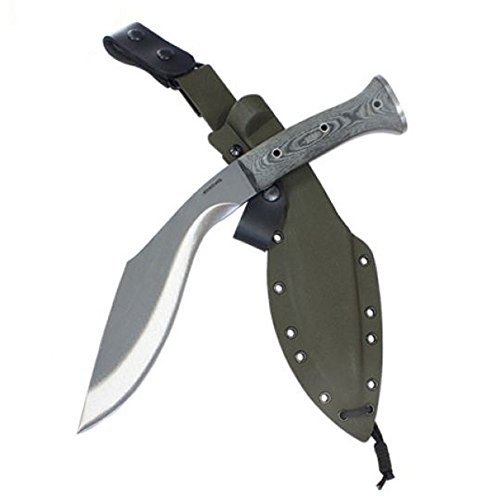 Regarded as a deluxe tactical form of a heavy-duty kukri, this Condor machete possesses an imposing gamut of features, ranging right from the solid steel pommel to the contoured micarta scales. Being a kukri, it needs no explanation or justification for using it in combat situations apart from for the daily utility tasks.

The 10-inch full-tang blade is made using 1075 high carbon steel and has a blasted satin finish to give an appealing look. The edge is razor-sharp and is hand-finished.

This steel material is tough and durable and is considered a functional material for machetes. It is more affordable and harder than stainless and maintains its edge longer. However, this steel is tough to sharpen and is susceptible to rust.

The Micarta handle features triple hollow rivets that enhance the functionality and feel of this machete while rendering lasting phenolic performance. The included premium Kydex sheath with a belt loop of leather retains the machete securely while contributing to a smooth pull and convenient dangler-style carry.

In short, this is a heavy-duty machete made for the toughest use

Types of Machetes Ideal for Combat

The primary use for machetes is agriculture across the world. But they were used as a weapon for both offensive and defensive purposes in history. Here are some of the types of machetes that have documented evidence of being used as weapons.

Also known as the Gurkha blade, the kukri comes from Nepal and its adjacent nations, although its popularity is all over the globe as an all-purpose tool. Although the design can trivially differ, it usually features a 16-inch, highly curved blade.

This drastic curve means more contact area of the blade, rendering the tool reliable for chopping and slashing. On the contrary, a straight blade is more suitable for thrusting.

It is unique in terms of its blade shape, which is split into three parts, namely, the narrow bottom close to the handle for carving and whittling, the wide middle part for chopping or cutting through the thick bush, and the pointed upper tip for stabbing and piercing. This division makes this machete an all-around tool.

For combat and self-defense, it is the pointed tip that is considered the most reliable part. Interestingly, its most famous use is for defense purposes. The only issue is its bulkiness, due to which your arm may ache after the combat.

This is another Southeast Asian (Indonesian) machete that has distinct physical features to set itself as a combat machete. Although with a history of military use, a parang is a versatile tool just as a kukri.

Unlike a panga and bolo, a parang features a thicker and shorter blade with a primary grind. The bottom part is quite lean that broadens up slowly to the non-pointed blade end. Even the edge of its thick blade is split into three sections, each indicating a distinct use.

The top end is ideal for precise skinning and cutting, the middle part is designed for ideal chopping, while the bottom part is for carving and whittling. The long blade length that can go up to 24 inches makes parang a great survival machete.

The distinctive curved shape features a curved spine as well as the edge. The machete is either marginally or fairly evenly weighted. Parangs appear to be like long swords with a broad end to keep slipping at bay. Due to the long blade, they usually have three edges.

This is another Indonesian machete but is often considered a parang in Malaysia. However, a golok is heavier and shorter than a parang. It has a short size and good weight, a blend ideal for clearing tall grass and big bushes. While parangs are for vegetation, goloks are for chopping heavier foliage.

Just as a parang, a golok is admired as a reliable self-defense weapon in the most adverse situations.

This is a machete whose blade has the shape of a wide leaf. It is one of the most commonly seen machetes. Native to the Philippines, the Filipino clans had used it against the European invaders who feared this machete for its capability of cutting through the rifle barrels.

Today, barongs are commonly seen in Filipino martial arts and combat situations, although they are also used for other jobs such as cleaving wines and clearing bushes.

Unlike other machetes, barongs are sharpened only on one side. They are heavy long and look more like swords than machetes. However, they are of different sizes.

Also known as wilderness machete and survival machete, a bowie machete is ideal for backwoodsmen and survivalists. It is usually a longer version of a typical bowie, being 10 inches or longer. Named after the famous American frontiersman Jim Bowie, this machete features a clip point that is known for skinning wild game. This point, however, weakens the blade, due to which a bowie is not ideal for much chopping.

Panga is popular in Africa, where it is used for a variety of tasks. It is similar to a bolo machete but differs by possessing an upturned tip that is meant for piercing and stabbing, as the full blade force can focus on a small region. It has a blade that widens on the backside and measures 16 to 18 inches long.

While the deep belly facilitates balanced chopping and the curvature contributes to slicing and light chopping, the point adds to the force needed on a small piercing area.

For many, a panga is perhaps the fiercest-looking machete. Some pangas have both sides sharpened, indicating that they can slice through the gut quite quickly. In many models, the upper inclined portion is sharpened.

This is similar to the panga. However, the blade waves just before the tip to facilitate more efficient chopping. A bolo is commonly seen in Filipino households and is used for chopping big foods, harvesting narrow crops, and clearing vegetation. However, it is also used to train the seekers in the Eskrima, a Filipino martial art. So, it can be a good choice for combats.

In short, a double-sided panga is ideal for effective slicing, a bolo or common bush machete is for those who wish to have a longer blade to maintain more distance between themselves and their opponents. A kukri is ideal for cutting the head off or stabbing an attacker!