Regardless of whether you are a leisure cook or a professional chef, you will own a kitchen knife with a steel blade. If you’re looking for Japanese knives, it is important to look for the different types of steel used in the blade, such as a white steel knife and a blue steel knife.

The type of steel used in a knife primarily indicates how the knife will perform. Steel is fundamentally an alloy made up of carbon and iron and is usually enriched by adding other elements such as nickel, chromium, and tungsten to enhance a few characteristics as per the applications for which it will be used.

Further, the different types of steels are made by including the other elements in varying amounts. They also vary as per the process utilized for rolling or heating the blade.

When it comes to manufacturing kitchen knives, three main types of steel are in use namely, powdered, corrosion-resistant, and high-carbon. The latter one includes the conventional Japanese steels. A knife made using blue steel is typically a high-carbon tool.

A knife made using a high-carbon steel sheet has carbon anywhere from 0.6% to 1.7% in terms of weight and lacks chromium. It is preferable by Japanese chefs. It is also widely used in premium knives, as high carbon means that the material is forged to a high hardness measuring on 60+ Rockwell scale to render a highly-sharp cutting edge and ensure easy resharpening.

Carbon steel knives are exceptionally sharp but are known to demand good care and maintenance. This is because they are likely to rust in the absence of this care. However, these knives are easy to maintain. You only need to wipe them dry after using them every time and oil the blade occasionally.

In Japan, white, yellow, and blue are the names given to different carbon steel materials that Hitachi, an esteemed steel maker, provides. They do not indicate the steel or tool color but are only branded names.

The differences between these steel materials are likely to be subtle and they all are designed to deliver a specific knife experience. 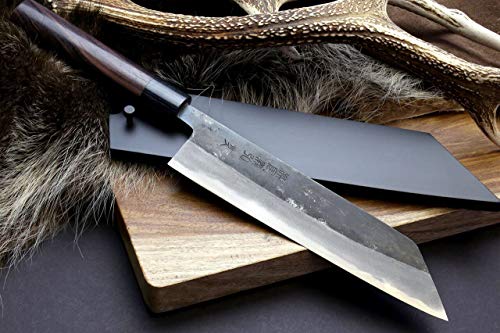 As stated above, different metals or alloys are added to steel to make its different types. For instance, stainless steel is produced by adding chromium that ensures improved resistance to corrosion. Similarly, blue steel contains a mix of .5% chromium for better corrosion resistance and tungsten for better wear resistance apart from 1.1-1.5% carbon and iron to handle an easier tempering process.

Tungsten significantly increases the wear resistance ability of steel. Thus, a knife made using blue steel is more corrosion resistant than the one having only iron and carbon. In Japan, this knife is known as ao-ko or Aogami knife.

In the Japanese language, AO means blue, KO refers to steel, and Gami means paper. Thus, an Aogami knife is also known as the blue paper-knife. You can see the stamp of ao ko or ao gami on the rear side of the blade. It is an alloy steel having a low content of impurities. This steel is named blue due to the blue paper being used over it during production.

In technical terms, Aogami is obtained by mixing the aforementioned additional elements to Shirogami or white paper steel containing only carbon along with low content of impurities. The benefits of using this steel blade are significant, which are as follows:

Designed specifically for knives, this steel is not as hard as white steel. This indicates that the edge is relatively less sharp and is also more challenging to chip. It is also more difficult to sharpen although it cuts better than the white steel when dull.

The blue paper steel features significant stickiness and is resistant to abrasion due to chromium and tungsten. This reduces your concern about chipping and wearing to some extent when compared to white steel. Still, as there is a significant amount of carbon in blue paper steel, rusting and chipping cannot be eradicated.

Among all the expected features or benefits, the most important ones are the edge sharpness, the duration for which its sharpness lasts, and swiftness with which sharpening can happen. Many people believe that blue paper steel aimed to accomplish these benefits although it was originally developed for shaving a Japanese pillar of wood.

Today, blue steel is primarily used in making chef knives of top quality for professionals. Thus, blue steel knives are costly but they retain their sharpness for the longest duration. They are ideal for slicing sashimi for five hours a day!

The main difference between A and B types is in the form of contained carbon quantity. The more this content, the harder a blade is. A hard blade can cut food well, although it is prone to chipping and rusting.

It is also worth noticing that when the quantity of carbon changes, tempering or quenching temperature also changes in part. This temperature difference, although a bit, affects the precision of a finished kitchen knife.

Apart from the carbon amount, the remaining ingredients (little sulfur and phosphorus impurities) remain the same. Phosphorus and sulfur tend to affect the sharpness but Hitachi strictly controls them in their steels.

It is easy to tell the difference between these two sub-types by looking, using, and sharpening them. Another difference is in the level of hardness that differs as per the tempering temperature. At times, the skills of a blacksmith can deliver the same hardness level for both of them.

In a nutshell, a skilled chef will easily appreciate and relish a blue steel knife satisfactorily with “#1B or #2B”. Of both #1 and #2 types, the #2 type is used more widely in making kitchen knives. As an amateur, consider starting with a #2 knife and then go for Aogami #1. 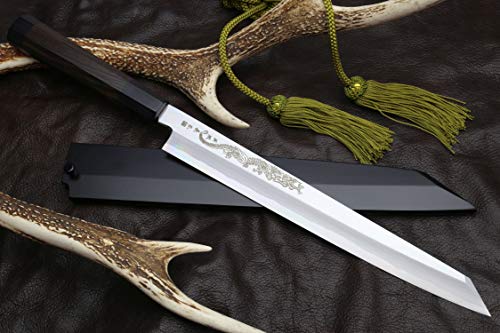 Regarded as one of the traditional Japanese knives, this Yanagi Kiritsuke is a long slicer that is made to cut thin slices. It is a bit heavier than the standard Yanagi with a wider blade and thicker spine. Crafted with hand using the traditional techniques, this knife features a fully flat grind on the front along with a concave grind and a flat rim on the rear.

The mix of such grinds enables cutting food with the least harm to the cells as well as the surface. This means the taste and texture of food remain intact. The flat rim flanking the concave grind augments the single-edged blade’s strength.

Crafted with great skills, the Yoshihiro Aonamiuchi’s 11.8-inch long blade is wave-forged. It is meticulously forged with iron due to which you enjoy watching those spectacular wave-like patterns. The blade is made using Blue Steel #1 whose hardness level is between 63 and 64 on the Rockwell scale.

This blade is ergonomically attached to an octagonal handle in the Wa-style. Made using ebony, the handle is light and ensures gripped flawless use. This blue steel tool also comes with a Saya, a wooden sheath that protects it and augments the classic black look when not in use. Due to a sharp edge, this knife needs proper attention and care. 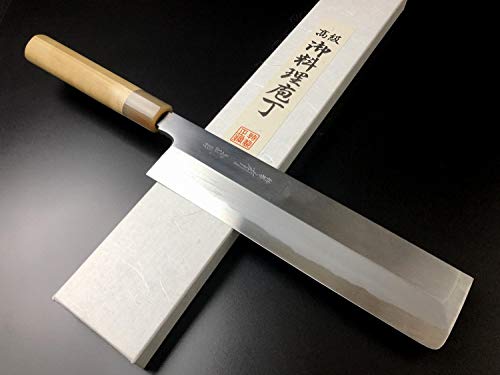 ARITSUGU is no ordinary brand; it is an expert brand that made Japanese swords since the 16th century for the Samurai. Thus, this blue steel knife by this brand is truly a tool to admire and relish without any complaints. Unlike a general kitchen knife, this one is a specialized one reserved only for vegetables.

It is an Usuba knife that is primarily used for cutting, slicing, and chopping vegetables. It is made using blue steel #2 whose hardness measures 62+ HRC on the Rockwell scale. Thus, it is truly a tough and highly sharp knife.

The 9.44-inch long blade is pretty sharp as well as thin but has a wide spine. Made using the traditional technique used to designed swords for the Samurai, this knife is the choice of professional chefs for cutting vegetables. It is preferably used for carving Sakura flowers apart from different vegetables.

A cool feature of this knife is its ability to accept custom engraving. You can have your name or something else written on it through a free service. If you opt for it, your knife can become a unique tool in your kitchen. You can even consider gifting it. 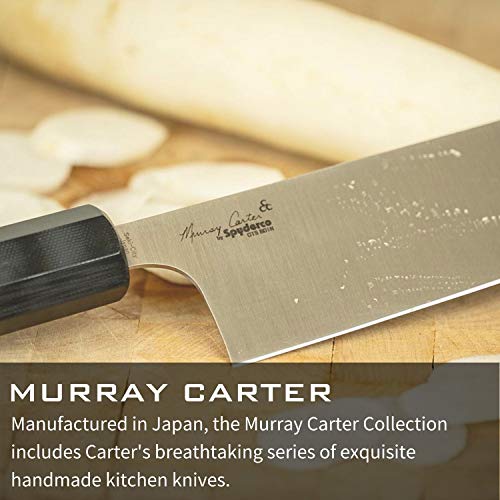 Although not a pure super blue steel knife, the Itamae collection by Spyderco is an esteemed one. Itamae means ‘in front of the cutting board’ and its knives feature unbending artistry and premium materials. These knives are specially for highly skilled sushi chefs.

The knife features the popular and versatile Funayuki pattern that tops at draw cutting, chopping, and other kitchen chores. The blade of this Funayuki knife is proficiently designed using laminated steel involving an Aogami super blue core between the SUS410 stainless steel layers.

This typical structure facilitates the outer layers to support and defend the ultra-hard super blue steel in the center making the blade’s edge. The 6.29-inch long blade features a flat grind, a straight and plain edge, and an exceptionally thin edge to ensure matchless cutting performance.

The blade also comes with the carter elbow, which refers to a unique narrowing area starting from the spine to the tip of the blade. It is attached to a conventional octagonal handle that is designed using the striking burl G-10 material and accentuated with black G-10 ferrules.

A blue steel knife is highly durable, extremely sharp, and delivers high cutting performance with its longest-lasting edge. Also known as an Aogami knife, its blade is typically super thin and wide. It is also one of the hardest knives in the collection of high-carbon knives. There are many types of Aogami knives, of which the best one is dependent on your requirements and budget.