As the name indicates, a flint knife refers to a knife made using a flintstone, whereas flint knapped knives is a collective term for knives with stone blades using the process called knapping.

Flint is one of the valuable stones used widely in the pre-historic era. Invented during this time, the stone was in use by the Neanderthals, one of the archaic human tribes.

Today, it is considered as the modern Stone-age family material. A knife made out of flint is pretty sharp. Its main use during the Stone Age was to trigger a quick attack but with less damage than a knife made using copper. It was used to take four hits to slay down a grey dwarf using this tool.

Designed with different edges, this tool was widely used for cutting foodstuffs, preparing animal skins for making leather, and scraping things. For scraping, the user may have held the straight edge while using the curved, sharper edge.

Some serrated models acted as saws particularly for cutting wood. The original flint knives were identical to small, rectangular saws. A few had ivory handles, which were reserved only for religious ceremonies.

Sounds interesting, right? So, let’s learn more about it.

Contents show
1) Flint Overview
2) Where to Buy Flint Knives / Flint Knapped Online
3) Reasons to Choose Flint for Making Knives
4) Flint Knapping
5) Designing Your Flint Knapped Knife While in the Wilderness
6) Frequently Asked Questions
6.1) Is a flint knife sharper than that of a knife made using steel?
6.2) Is a flint knife better than an obsidian knife?
6.3) How long does a knife made using flint last?
7) Conclusion

It is worth pondering what made a flint knife so useful. It is the flint material of which it is made up of. So, what is this flintstone? Structurally, it is a rock. It is a sedimentary rock of chert family and is a kind of microcrystalline quartz. Many times, both chert and flints are used interchangeably.

Chemically, flint is a hard rock that splits with a conchoidal fracture. It is often seen as nodules in grainy rocks such as marine limestones and chalk. Although the nodules could be found distributed across the rock, they are usually concentrated in unique layers.

Some of these rocks are formed due to the buildup of siliceous skeletal material, which may recrystallize. As a result, a layer of bedded flint could be formed.

Regardless of where you see in the world, no other stone except for the flint was utilized more universally. Above all, flint formed the basis of all technologies invented during the Stone Age.

Unlike other types of knives, there are no companies manufacturing flint knives or flint knapped knives in bulk. These are hand made knives. Luckily we were able to find a few such knives on Amazon handmade. 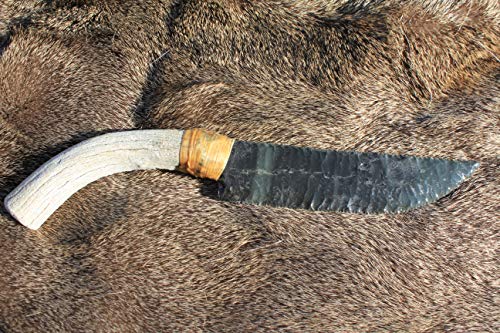 There is no doubt that Flint was one of the most vital Stone Age materials, which people across the world used it not only for making knives but other tools such as axes, bifaces such as projectile points, and spearheads.

That said, it is natural for our minds to raise an evident question as to what makes this stone so preferable. So, let’s check out the reasons for the same.

Flint is a distinct rock that is very hard just as other forms of quartz. Thus, it is highly durable as well. This was found useful by the nomadic people who used to put much effort into making tools but without wasting time or resources. Now, the question arises as to why not use quartz.

Flint, as a microcrystalline type of quartz, features a distinct molecular structure. While there is science related to it that we need not comprehend here, what is important is striking flint in a precise manner, which breaks it into identical flakes having an extremely sharp edge.

This trait made the stone highly valuable to the people of the olden days. Although hard enough and reusable, the stone was also practical in terms of performance.

The ancient people were aware that hitting a big piece of flint with a bone or some other rock would break it in expected and manageable ways. Other rocks would simply crack or break due to which they become futile for making useable tools.

With it, you can easily start a fire. You start by producing a red, hot spark by hitting its sharp, hard edge against a piece of high-carbon steel. This striking results in friction that ignites steel shaving.

Regardless of the weather, the resulting steel spark is then instantly caught in the fire-charred substance, subsequently put in dry tinder, and puffed into flame.

Flint is highly resistant to seasoning. It is often seen as cobbles or pebbles along the shores of beaches and streams and beaches. The ancient people used to look for it at these places. 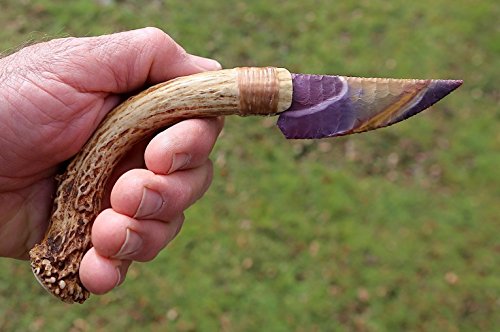 When struck by some other hard item, it is known that flint fractures and disperses into a characteristic pattern known as a conchoidal fracture. This results in rock fragments known as sharp, slim splinters. These splinters are also known as flakes, which when shaped well, were turned into knife blades.

This process of making a knife blade is known as knapping. This is why such a tool is also termed as a flint knapped knife. Methods of shaping flint and other such stones for making sharp knives and other weapons are among the original technologies that the prehistoric tribes developed.

One such method is flintknapping. To truly comprehend and value these stone-bladed knives and what was their place in history, it is vital to appreciate flint knapping. It is the process of preparing stone tools by chipping or flaking the stone to gain the desired shape and sharpness.

Flintknapping was also one of those specialized technologies, which required a high skill set and training. With different combinations of practice, trial, and error; the knappers became expert craftsmen who could make stone tools in just a couple of quick blows.

Knapping involves shaping different stones such as obsidian (Read more on obsidian knives) or volcanic glass, chert, and flint by implementing the procedure of lithic reduction.

The procedure involves controlled breaking of the stone by removing surplus material meticulously as well as systematically for giving the desired shape and providing it a single edge or multiple edges for cutting.

The specific features of each flint piece typically help in identifying the objects that one can make using it. Thus, up to some extent, the piece itself governs the exact form each object will take from it.

Flintknapping needs specialized tools made by hand apart from substantial expertise. It has been found that the prehistoric knappers may have used standard hammers for shaping flintstones. The hammers were also made of bone or wood.

In the first phase of flintknapping, hard hammering with other hard stone is involved for splitting the flint nodule into flakes. Each of these flakes was then handled through more precise techniques of soft hammering to shape the overall form.

Finally, the edges were sharpened or serrated via controlled pressure using antler points or wood. Flintknapping seems to be a skilled job but is easy to learn if patience, practice, and proper instructions are followed.

Following are the flaking processes involved in flintknapping:

Although a knapper typically relies on an antler baton or billet for some detail work, a round stone is enough for performing the basic process. At times, even heat treatment is implemented to boost the knapping quality of small and medium cores or flints. Herein, high heat is applied gradually. The core’s flaking quality boosts, as its texture becomes less grainy and smoother.

The significance of accomplishing form and balance in a blade may have motivated the early humans to value aspects such as symmetry, curvilinear forms, and aesthetic appeal.

The same motivation seems too alive even today. Modern knappers seem to use copper tools as knappable stone materials. Thus, even today, you will come across finely-designed stone knives.

Designing Your Flint Knapped Knife While in the Wilderness 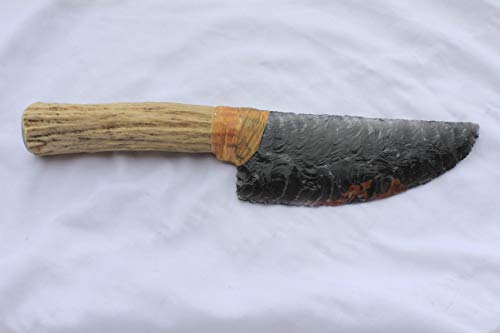 Yes, even you can make one such knife! If you ever recognize the need for a sharp edge to trigger a fire or cut a rope while in the wild, the ingredients for the same can be obtained from the most backwoods.

So, what you need? Well, there are just two things namely, rock and rock. You need only two rocks, first being flint, obsidian, jasper, or chert for splitting it into sharp flakes. Flint can be easily seen in and around rocky projections and river bottoms, especially if limestone is there.

Next, you need a circular rock whose size is just like that of a small apple. This will act like a hammerstone. You can find such a stone from almost anywhere but creek bottoms are where they reside abundantly.

It is wise to gather a couple of flint nodules and split them as a part of learning. It is easy to find a sharp stone for making your flint knife but it needs the experience to strike the flint well to split it just right. Thus, it is wise to practice before you go out.

Is a flint knife sharper than that of a knife made using steel?

Is a flint knife better than an obsidian knife?

A knife made using flint is somewhat less sharp than an obsidian one. However, it is better at holding its edge.

How long does a knife made using flint last?

This depends on the overall build quality and usage frequency. Ordinary flint blades usually last up to approximately 3,000 fire strikes. The big blades can even last for up to 10,000 fire strikes.

A flint knapped knife is an ancient tool that is still in production, made using stones like flintstone. As a hard rock, flint is found naturally as nodules in softer sedimentary rocks like chalks and limestones where geologic compression forms it. The ancient tribes recognized this trait and learned how to shape it into sharp tools such as blades, scrapers, axes, saws, drills, and projectile points. Nowadays a flint knapped knife is more of a collectible item rather than an everyday carry tool, although they come very sharp.