The Swiss Army knives hit the market in 1891. Made in Switzerland, they raised the quality standards for knives and gained an impressive worldwide reputation. At the same time, they helped Switzerland establish itself as an extremely precise and qualitative manufacturer. But since these knives are so old, finding a vintage unit could raise a series of question marks, whether you get the knife from your grandfather or you find it somewhere at a garage sale.

So, how old is your Swiss Army knife? There are a few general rules to help you establish the age of a knife. It makes no difference if you want to know more about it to sell it or you want to establish its history. Some modern knives are relatively simple to identify, but others could cause a lot of confusion. Here is everything you need to know about dating a Swiss Army Knife.

Contents show
1) Dating a Swiss Army Knife with Stamps
1.1) Swiss Army tang stamps explained
2) Seek help from an expert
3) Find some print materials
4) Get in touch with the manufacturer 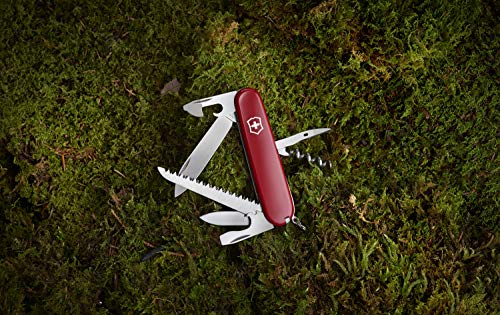 A Swiss Army knife manufactured in 1990 may have a very similar appearance to a knife made in 1920. Indeed, you can tell the fact that the older knife has more wear and tear, and it obviously looks older. But then, if the knife was well-preserved over time and barely used, it may look even better than the newer alternative.

So, what factor makes the difference then? Just like for other brands, the stamp is what you need to pay attention to. Most manufacturers stamp their knives with various codes to help users identify or date them. Some others do not. However, they will still bring in their logo. Even the logo can tell a lot about the history of a knife, as brands tend to change logos over time. Therefore, you can still get some hints about the age of your knife.

Most brands will choose the area on the blade closer to the handle for their stamps. Some of them do it on the handle, yet this part is commonly exposed to wear and tear, so it may wear off. Swiss Army knives come with a stamp close to the handle. You are less likely to use that part of the blade anyway, so it will easily face the test of time.

Swiss Army knives come with a plethora of stamps. There are more than 130 different stamps out there, and each of them has a story to tell.

Stamps saying Gesetzlich Geschützt on two lines were made between 1891 and 1901. Different variants of this logo were used – same reading on a single line or with an italic font over two lines. There are no differences in the manufacturing years. If you can read Depose on the knife with a handwritten font, you can count on the same years – 1891 to 1901.

As the company kept rebranding, the Armee Suisse logo with an italic font was introduced for knives made between 1891 and 1945. A cross is on the left side of the writing. The same logo with straight letters means the knife was produced between 1897 and 1945, while an SMV logo with a cross under it defines a completely different range – 1908 to 1930. During the same time frame, Swiss Army knives had a simple E as a logo – different font for different collections.

The logo evolved to Victoria in a stylish frame between 1909 and 1930. During the same time, the Elsener Schwyz logo came back – simple writing with different fonts. A few other variations of Victoria were used during the same time, with one of them standing out – plain text with a straight font. This one was produced between 1909 and 1923. Between 1923 and 1930, Swiss Army knives were marked with Inoxyd and the letter E under the word.

Starting with 1920, the Victoria Switzerland logo was used – two lines, straight font. The logo was used until 1950. Elsener Switzerland, written on two lines, represents a stamp used between 1920 and 1940. If you only have a stamp that says 50, it could be a bit confusing. The stamp was introduced in 1921, and it is still in use these days, so it might be tricky to find the answer.

The Victoria logo with a crossbow through the middle of the word facing upwards means the knife was made between 1923 and 1930. A simple horizontal crossbow was also used in this time frame, as well as Victoria Inoxyd in a nice frame, Victorinox in a frame, and Inoxid. From 1923 to 1933, some knives only said Inoxid in an italic font. It looks like the letter J, though.

Made in Switzerland is another common stamp used between 1923 and 1930, while Elsener Switzerland Stainless was used in 1930 and 1940. During the same time, Swiss Army knives had an Elsener Swiss logo on two lines, while Elsener Schwyz Swiss Made was used between 1930 and 1950. Huguenin Switzerland Stainless is not that common, but the stamp was also used from 1930 to 1955. From 1931 to 1960, you will find two logos – a simple R and 48 P written on two lines.

Starting with 1931, Swiss Army knives came with the Inoxyd and Victorinox logos in a similar design – both on a flag and with a crossbow facing up. These stamps were used until 1942. During 1931, a few new stamps came out too – P, 36P, and P36. From 1940, you might see Anticorro, Poldi, Victoria Switzerland 471 over three lines, and Victoria Switzerland 476. Between 1943 and 1951, you may also find a series of different stamps saying Victorinox and Inoxid on top of a crossbow.

Elsener Schwyz with large regular letters over two lines was used from 1932 to 1956, while different varieties of Swiss Made were used between 1943 and 1951. Victoria with a crossbow behind it facing upwards was stamped from 1943 until 1973. Hoffritz Switzerland Stainless and Switzerland Stainless Rostfrei (and a few other varieties) were used from 1957 to 1986. As time passed by, Swiss Army knives came with simplified tang stamps.

Economy and Victorinox Rostfrei were used from 1976 until the 1980s. Starting with 1984 and 1986, you may see Victorinox Switzerland over two lines, as well as Stainless Rostfrei, Patented, Pat. Pend and Mod. Dep. These stamps are still used today, meaning finding this stamp will give you a very rough idea about the type of knife you have. You would need to do more thorough research to identify the precise year. Victorinox Switzerland Stainless Rosfrei over four lines was also used until 2008.

More modern knives may bring a stamp saying Victorinox Switzerland Stainless – in use between 1993 and 2009. Officier Suisse is also quite common in many knives, but they were all manufactured in 2005. Victorinox Swiss Made Stainless over three lines is another modern tang stamp – used between 2005 and 2009. Pat. Pend. is common these days too. It has been used since 2007 and many new knives still come with this stamp.

Between 2009 and 2011, the company relied on a simple stamp saying Victorinox Swiss Made Stainless over three lines. Starting with 2013, many knives feature armor with a cross, as well as the brand name Victorinox under it. The stamp is still in use these days. A similar logo – but without the armor – is used in knives after 2014. The font is clear and regular – no extras. Finally, if you can read Victorinox Swiss Made Delemont on the knife, it was made in 2014.

Here is a visual guide made by SAK-enthusiasts ulli and elsinox from Multitool.org

Seek help from an expert

What if you cannot find a tang stamp? What if the knife is so old that the stamp is gone? What if you can see the stamp, but there is nothing about it? This is when you have to seek help. You can get in touch with local experts – find them online. Allowing them to see the knife in real life will help them figure out its age more accurately. You can also find faraway knife experts – even abroad. Get in touch with them and send some detailed photos of your knife.

While many professionals will be able to tell an approximate date based on the knife design and appearance, some rare stamps or designs will require a bit more help. Last but not least, you can also join public discussion boards and forums. Start a thread, inquire about the knife, and someone might be able to help out. Even if you do not get a very specific answer, at least you know which way you are going.

Assuming you have a clue about the approximate age of your knife, browsing some print materials from those times may help. Get your hands on some magazines or perhaps some catalogs. You might find the knife you have featured in them. Brochures from those times will also help. You may not always be able to find them physically, so try finding vintage magazines over the Internet – scanned and available for download.

Get in touch with the manufacturer

These days, the company behind the Swiss Army knife is known as Victorinox. Who else can be better at dating an old Swiss Army knife than a Victorinox expert? Exactly. Get in touch with the company and ask for help. It may not be an inquiry related to sales, but being able to date such old items will make the customer service representative happy. Most people will be more than happy to assist you, and they will love seeing part of the history of the company they work for.