​Although an old brand, Schrade Cutlery is still an esteemed brand known for its valuable and most-sought-after knives amongst collectors and fans across the globe. As the brand has a history of making knives for a century, at first look, it can be difficult to identify the year of manufacture of its knife. Still, there are some ways to find it out. Let’s explore them in this post.

The classic American designs of Schrade knives have their roots in 1904 when the company was founded in New York. During this period of dawn, George Schrade was recognized as a trendsetter. Several of his ideas became the basis of sport knife designs that are sold even today.

Currently held by Taylor Brands LLC, the revered brand is proud to sell its knives for over 100 years to the generations of its customers worldwide.

Despite this long journey, it is believed that the brand had no good record of the date or year of manufacturing of its different knives. This is not to blame them, as they have produced so many knives over this period of over 100 years.

Thus, it is very hard to narrow the production time to a specific year, unless the tool was made only in that one year. It is known that Schrade, in the early ‘60s, stopped using bone for some time, a material used for making handles. However, there is no date or specific year known; it depends on when they started facing a lack of stock for a specific knife.

Nevertheless, the later SFOs or Special Factory Orders like the Tradesman and Heritage sets had bone handles. The bone material from these knives is believed to come from Germany. Thus, nothing is engraved on the stone when it comes to Schrade knives.

Although Schrade did not maintain records, its tang stamps are likely to help in narrowing down a few knives as per the year of manufacture. If there is a serial number on the knife, you can narrow it further. Still, it is vital to know that the brand used serial numbers only while promoting the guarantee given against the loss for a year, which was for its Uncle Henry (UH) knives.

Ways to Date a Schrade Knife

It is said that looking at the tang stamp and cover materials is ideal for finding the specific production year of a Schrade knife. However, there are some more ways to try. Let’s explore all the ways now!

Looking at the Knife’s Tang Stamp or Logo

This is the simplest way to narrow the age span of a Schrade knife. The tang stamp is usually seen near the blade’s base, which also indicates the brand. The Schrade Company has modified the tang stamp several times. Collectors use these modifications for identifying the age of a specific model.

The oldest stamps, used only in the early days of the brand’s foundation year, had the phrase “Schrade Cut. Co”. This phrase is followed by “Walden, NY” and “Germany”.

Several other stamps were used, with a few stamp years overlying one another as per the model. You can easily find a tang stamp chart online, as it is the most reliable source to know more about any Schrade knife.

In short, you need to use a magnifying glass amidst a lit room to know design details and markings on your knife.

The name marked on the knife is the first thing to look for. For example, “Schrade Cut Co.” and “Walden, N.Y.” in arc shape means the Schrade knife dates from 1904 to the WWI era.

Here is a picture guide for your reference.

Here are other ways to date a Schrade knife.

The OT knives are still among the brand’s famous knife lines. Their production started in 1959 with 2OT being the first model to be released. The brand released over 75 models and repetitions of its OT series from 1959 to 2004. So, if you have an OT model, its model number will aid you in distinguishing it from the novel ones.

Look for the model number on the tang stamp close to the country or state of origin. Now, search for this number on collector sites to know the age span of your knife. A few collectors have taken immense effort to record the period of production of each Schrade knife. OT values differ significantly from one model to another, as per its rarity and appeal. 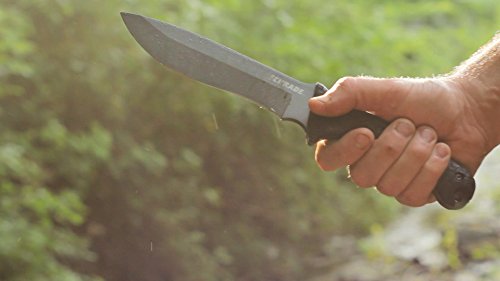 A few old-style models are truly newer than what they look like. This can make it more difficult to assess their actual worth. The brand has launched many anniversary-edition knives whose appearance is identical to the vintage originals.

After the closure in 2004, Schrade was overtaken by Taylor Brands LLC who reissued some of its famous knife models and purchased a couple of its trademarks. Smith & Wesson branch of Battenfeld Technologies later overtook Brands LLC. Interestingly, even today, Battenfeld makes knives under the Schrade brand, covering the OT, Imperial, and UH lines.

So, if your knife is one of those models that Battenfeld Schrade has made, search for its details on the official website of Battenfeld. A few of the Taylor or Battenfeld Schrade models come with unique, new model numbers, which were introduced after the cessation of the Schrade company.