Featuring a single-edged curved blade, the Japanese Katana is undeniably one of the world’s most remarkable, high-quality swords. In medieval Japan, it was in use by the samurai warriors who trusted its effectiveness to defend from any opponent. This effectiveness is directly proportional to the blade’s sharpness.

Yes, a Katana is that sharp! However, such a highly sharp blade also means frequent dullness. So, if you are lucky enough to have and use an authentic Katana, it will finally get dull. So, has it become dull? Okay, so now, you will think of sharpening it.

A straightaway answer here is NO. Seriously, do not sharpen a real Katana on your own. Just give it to a professional swordsmith. However, if you are proficient in sharpening knives go ahead. 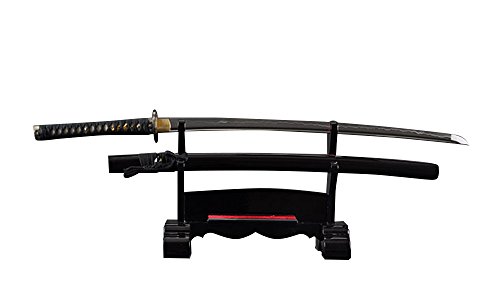 Forging a genuine Katana is a hard, time-consuming job. It takes weeks or months to complete the production of this sword. Once forged, the tool is sent to someone else for sharpening. The traditional process of sharpening has remained almost the same.

Even today, grinding stones are used to sharpen its blade. They work by peeling small amounts of the blade to end up with an incredibly sharp blade.

Before sharpening, it is essential to know that a Katana has a peculiar shape and a sharp blade so that it can cut even the hard targets such as wood. Just looking at its cross-section gives you a unique, round feel. Further, from the blade’s rear, the edges curve outward and inward before meeting at the edge.

While sharpening a Katana, you need to change the inherent blade shape to ensure that the curves retain a constant flow. Moreover, the sides of the blade need to be symmetrical. Sharpening a knife is easier as there is only an edge involved. However, sharpening a Katana involves an edge of two planes.

You also need to rely upon several stones of different grits, ranging right from fine to coarse. In case you committed an error at one step, it is impossible to rectify it in the next step. So, you need to be extremely careful while sharpening your Katana.

Best Way to Sharpen a Katana 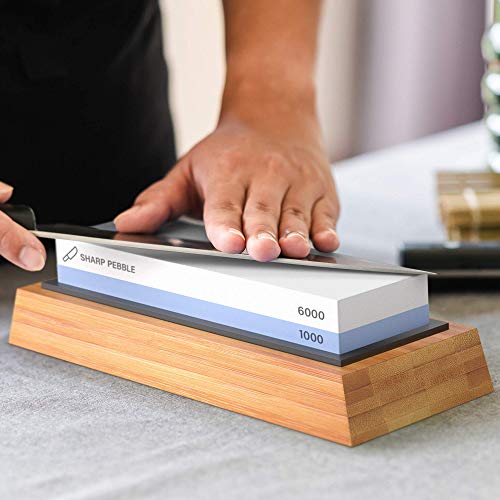 Before exploring this way, it is worth comprehending that this is not something that a novice should perform. If you have never sharpened a blade, it is not worth trying it on your own without any guidance. Katanas are far too precious to be put at a risk like this.

At the time of sharpening a Katana, you should initially use coarse low-grit stone. Then, you can slowly use finer and higher-grit stones. Luckily, this is the same hypothesis used for sharpening any knife’s blade or any other tool’s blade. A coarse-grit stone discards more metal, while a fine-grit stone one sheds less metal and aids in rendering a sharper edge.

Here is a good video on how to do this

In the olden days, water stones were widely used in Japan for sharpening the bladed weapons, including the Katanas. Many people believe that these are weather-worn stones that are seen in small water bodies such as rivers and lakes. However, the Japanese water stones are not these stones.

Instead, these are natural stones made up of silicate and clay and are loosened using water. It was already found that the stones lubricated with oil significantly minimized their sharpening effectiveness. Thus, the Japanese swordsmiths started lubricating their stones with water.

These lubricated stones with water are available in different levels of grit coarseness. A few of the coarsest ones have only 500 to 1,000 grit, while the finest ones have 7,000 to 10,000 grit. The one who will be sharpening a Katana starts by using a lower grit stone and then moves on to the one with a higher grit. After sharpening the edge, it is time to sharpen the tip using a water stone.

No matter which sharpening device you use, it is indispensable to take the utmost care when it comes to how to sharpen a Katana.