Seeking answers to these questions indicates that you are thinking to buy a Japanese Katana. A smart buyer will always want to know about the sharpness and weight of this Samurai sword. If you have ever seen the tool in images and videos, it is likely to appear less hefty than imagined. So, is this true?

The fact is that there is no universally applicable answer when it comes to the weight and sharpness of a Katana. In other words, the answers to how much does it weigh or how sharp is it depends on their build factors.

Contents hide
1) How much does a Katana Weigh?
1.1) The Weight Range of an Authentic Katana
1.2) Factors Influencing the Weight
1.3) Weight Changes as Per Different Build Materials
2) How Sharp is a Katana?

How much does a Katana Weigh? 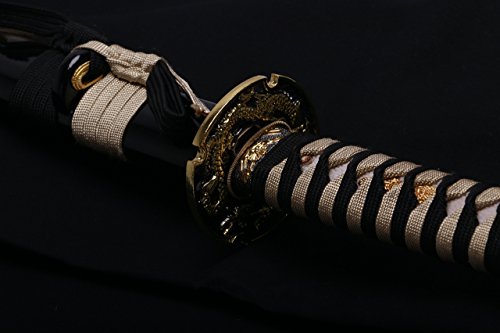 The Weight Range of an Authentic Katana

Whether you search on Google or go through the product description, you will find that the average weight of a Katana is approximately 1.2 kgs. Most Katana owners will easily inform you that their sword weights around 800 to 900 grams. Well, this is a sign of a lightweight Katana.

Thus, katanas can differ significantly in terms of weight. If you are a regular user of this sword, it takes no time to identify the weight difference. This is why these users prefer lighter katanas.

There are a couple of factors that help in ascertaining the slightest weight change in a Katana. This is why it is impossible to set a standard weight even though there are ranges to which the weight of katanas belongs. Following are the weight-affecting factors that you need to know:

The different parts that make up a Katana also contribute to small weight changes. For example, if the handle is light, the overall Katana is also lighter in weight. As a rule of thumb, the higher the Katana quality, the lighter its parts tend to be. Still, this is not a rule.

The biggest factor that affects the weight of a Katana is its build material using which it is made. Different steel varieties are used to make them, which are as follows:

How Sharp is a Katana? 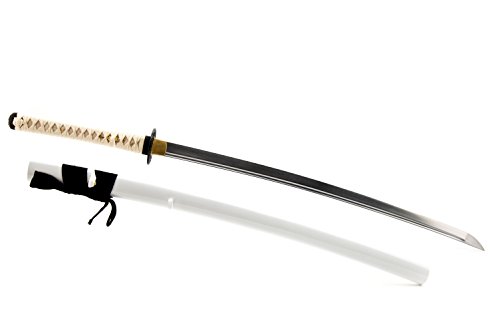 A Katana is undoubtedly among the finest weapons. But is it sharper than other swords?. Usually, they are are formed by layering pieces of steel sheets that contain varying amounts of carbon.

As a result, the carbon content becomes uniform in the final product, and oxygen and impurities get discarded. The outcome is a super-hard blade. In the case of high-carbon steel, you need to know that it is hard enough and is possible to sharpen such that it takes the thickness of a single molecule of the build material.

Although the Japanese swordsmiths have relied on folded steel for making Katana blades, the latest advancements provide a few better options. For example, Damascus steel is also considered as superb material for sharp weapons and hard forging.

While much less is explored about the ancient swordsmith techniques, the sharpest blade on this planet was made from Damascus steel. A Katana is sharper than any European tool or weapon. Still, it is not that sharp enough to cut the chain mail or plate armor.

Still, it is sharper than usual to cut through the limbs and bones to trigger death. Still, a sharper tool does not always mean that it is a better option. The overall performance depends on the curvature and hardness too.

The sharpness of katanas is usually tested by thinly slicing wood or cutting a piece of paper. Conventionally, wet reeds were used to gauge the level of sharpness, which imitated a human limb. A sharp edge is found to cut a torso but an extraordinary one is likely to cut through several torsos. However, skill is indispensable here. Only great edge sharpness will not work.

Wet reeds and limbs are much harder than paper. A Katana takes no time to cut through all three of them. However, timing, angle, technique, force, and accuracy also play a significant role.

So, how sharp a Katana is? It is sharp enough to give you clean cuts despite having a paper-thin edge and a hefty weight. If you received a dull Katana, see our guide on how to sharpen one.