There are movies where everyone falls in love with a character whether it is a human or an animal. Then, there are movies when props become the top player on the scene. Before ‘The Hunted’ came out in 2003, most people were not aware of Tom Brown Jr’s (disputed) knife – The Tracker #1. The knife from The Hunted gained popularity overnight, and this was when people started digging further to find out more about it.

Tom Brown Jr definitely knows what he is doing. The professional wilderness instructor and survival expert is well known among law enforcement agencies. He trains agents and other professionals to track down missing individuals, escapees, fugitives, and so on. While not directly involved with the actual movie, his experience brought in access to his signature knife, which actually made an incredible impression among the genre fans. Although it is disputed who actually designed it.

The Knife from The Hunted

The movie follows Tommy Lee Jones in a great role. He has a mission – he needs to find a wanted man. Played by Benicio del Toro, the wanted man has actually been trained in the Army Special Forces SERE. All in all, the movie brings in incredible skills of martial arts and an incredible cast, with Academy Award Winners on the cast list. But then, there is one character that gets lots of screen time as well.

The knife from The Hunted has received great attention than any other knife in the world cinema, except maybe for the bowie knife from Crocodile Dundee, or the OTF knife from John Wick series, or the Knives from the Rambo series. Regardless, but this knife was part of so many scenes, it feels like it should be on the cast list, which wasn’t the case with John Wick’s knives. Initially, there is a scene showing up how to make it from scratch. Then, the knife is used by one of the students against his teacher.

What makes the knife from the movie ‘The Hunted’ so popular

‘The Hunted’ knife is the living proof that a good movie can seriously boost the popularity of a knife. Sure, the Tracker has a shape that will instantly draw some attention. It has a distinct approach, and it is far from what people are used to. As soon as it came out, the company behind the knife has claimed facing difficulties keeping up with the orders.

Almost two decades after the movie came out, the Tracker is still one of the best-selling options out there. Obviously, things have changed a little since 2003, and new techniques have been updated to match modern demands. The knife comes in more sizes, and it is also available in various combo kits, there are 5-6 versions available these days. The Tracker #2 knife is available on Amazon.

It is worth noting that while the movie didn’t succeed at the box office, the Tracker became an instant bestseller despite the original version came in the ’80s. 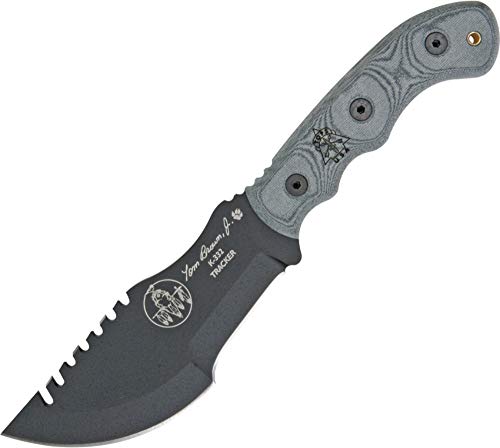 The knife from the movie The Hunted was an instant hit. Sales skyrocketed, but that was not the only good thing about it. They kept going up, meaning there was something good about that knife – rather than just good looks and a popular approach in cinematography. Designed by someone with experience in survival and tactical adventures, the knife had all the features required to make a difference on the field.

The knife was also featured on the Blade magazine cover and comes with a 6.3-inch long blade. The cutting edge is slightly shorter, and it also has a secondary 2.1-inch edge. It is a fixed blade design based on 1095 RC 56-58 with a black traction coating. The handle is just as attractive – black linen micarta. Altogether, the knife weighs more than 20 ounces, so it is well balanced.

A black Kydex sheath is included in the package. You can find different varieties in terms of handle or sheath coloring. At the same time, the knife is available in a few different sizes, so numbers may also vary – double-check the size if you are interested in something in particular.