A marlinspike knife is a sailor’s or yachtsman’s knife. It features an ideal combination of a blade and a marlinspike for splitting ropes. Sailing involves skillful tasks such as handling knotty ropes and rigid shackles for which a sailing knife is an essential tool. In most cases, such a knife is multi-functional and is much more than a water-resistant blade.

What is a Marlinspike? 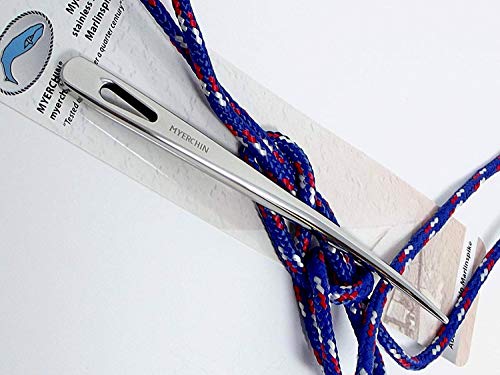 It is mainly a line spike that a sailor carries along with a rigging knife. It features a shape of a polished, thin metal cone narrowing to a flat or spherical point. It can be in the form of a wooden tool apart from a tapered metal pin.

A marlinspike is, basically, a splicing tool. It is used as a lever to open strands of a rope for splitting and braiding lines, loosening and unknotting knots tightened with tension, rigging on land, as a handle to tension a rope or marline tightly via a marlinspike hitch, and as a weapon against hostile borders on boats.

Marlinspike also refers to the art of seamanship encompassing the aforementioned tasks along with working with cable or wire rope and making ornate patterns from a line or a rope.

Marlinspike can be a sailor’s best pal on boats where there are spots too constricted to access with bare hands. In certain conditions, the tool can be handier than just a reliable sailing knife. If there is a knot that you need to loosen or untie although it is not a direct threat to your safety, you will be happy to use the spike.

Rather than quarrying around via the toolbox for a blade or a screwdriver to cut the line, you can quickly remove the dependable marlinspike from its sheath suspended from your belt loop for cutting the knot.

One more scenario in which this tool is useful or the best choice is when a shackle is held up from weathering. All you need to do is pierce the spike’s pointed end into the shackle while it is securely in place and rupture the tension present within the shackle.

Most marlinspikes are long. Their length is usually around 6 to 12 inches but can reach up to 24 inches and more for handling heavy ropes and cables. They are typically made using steel or iron. These days, you can even find marlinspikes of titanium although those of brass were also common in the olden days.

They can be separate tools or a part of multitool pocket knives. The marlinspikes on folding knives are usually as long as the knife allows, not more than that. Those unattached to knives are typically longer.

marlinspikes are considered similar to fids in terms of form and function. However, fids are made using bone, ivory, or wood. 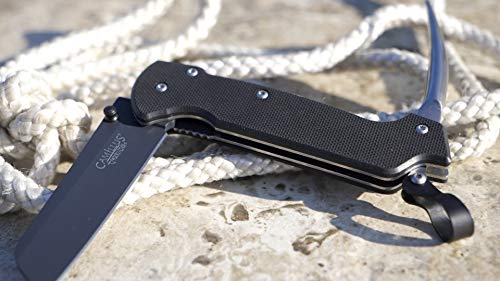 A marlinspike knife is one of the rare patterns that belong to the prestigious history of folding knives. It is usually a mix of the early rope knife, the Wharncliffe model, and the marlinspike looking similar to a weaving needle. Both were added to a folder to serve countless sailors as well as divers.

The resulting knife features a blade for cutting ropes and a spike for splicing ropes and untying knots. Indeed, there is a knot nicknamed as the marlinspike hitch acting as a provisional knot for different purposes.

Also called a rigging knife, a marlinspike knife is currently found as models of the original folders and features a modern touch. This knife is also useful for climbers who tend to come across several types of knots in their undertakings.

For sailors, these knives typically come with a fixed or folding blade that seamen commonly used while shipping. Most of them tend to have a simple design and reflect typical features. Those with fixed blades are called rigging knives, which are typically equipped with a marlinspike to splice ropes and untie knots.

These knives mostly have a drop-point or spear point blade and a handle conventionally made of wood. The contemporary versions are made using anti-slippery materials that are available in different colors and are quite comfortable.

Following are some of the traditional and new brands that are still offering the marlinspike knives:

This 6.5-inch knife from Camillus features a 2.5-inch non-serrated blade of modified drop-point style, a marlinspike, and a G10 fiberglass handle. The blade is made using VG10 Japanese steel featuring a mix of steel, high carbon, cobalt, vanadium, and chromium. This steel is admired for its durability and the ability to retain sharpness. It is also resistant to corrosion due to sufficient chromium content.

The blade is locked into place using a powerful liner lock. You can easily unlock it with a dual thumb stud and then use it with either left or right hand. The steel is coated with carbonitride titanium that is harder than the uncoated steel so that the blade can stay sharper and resist corrosion.

The marlinspike is also made using steel and is quite robust and rigid. It stays in place using the liner lock mechanism and is released via the shackle. The handle is made using the lasting G10 material, which consists of several layers of fiberglass drenched in resin. This material is resistant to moisture or liquid and remains stable even in harsh conditions.

The cool VG10 blade, G10 handle, and marlinspike do not fail to ensure versatility while performing most of the daily tasks. This knife is an ideal option for sailors who are looking for both a knife and spike in one tool.

Consider this titanium marline spiking knife if you wish to have an improved, professional-grade rigger of Myerchin. Yes, the titanium crew generation 2 model belongs to the improved generation of Myerchin knives.

The former Myerchin folders featured a lock of rear plunger style, which used to finally fail. However, in this model, the small spike deploys with one hand, locks and shuts up well, and handles half an inch and smaller knots.

The model is built using a novel heavy-duty frame hence it will last for a lifetime. Both the 2.3-inch blade and the 1.75-inch spike are made using German Marine stainless steel and titanium that is resistant to corrosion.

The steel is of pro-grade, which is analogous to 440C stainless steel in terms of edge retention as well as hardness abilities apart from the extra anti-oxidation properties. This knife comes with an improved locking mechanism that has no springs, which locks both the spike and the blade securely. It also comes with a nylon sheath or a pocket clip. 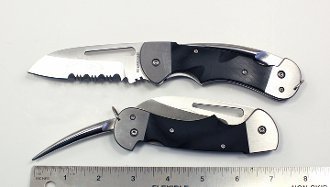 Consider this knife if you want a marlinspike and partially serrated blade in one tool. This is another knife that comes from Myerchin’s improved collection. Unlike the other models in this post, this one comes with a 3 1/4-inch blade whose three-fourth edge is serrated. This means you can use the blade for doing tough jobs too.

The spike is 2 3/4-inch long and is pretty strong. Both the blade and spike are locked well and are made up of German stainless steel that has high carbon content. The knife also comes with a nylon sheath and a belt clip.

How did the Name ‘marlinspike’ Originate?

The word ‘marline’ comes from ‘marl,’ a term widely used in the arena of ropes. Marl is when you twist two or more thin threads jointly to form a thicker line. Twisting thin lines makes them stronger than a line having the same thickness and the same diameter.

The resulting rope is termed as marline. Thus, a marline is an agile rope featuring two strands, using which it is easy to bind bigger ropes. Technically, it is defined as a small line of highly flexible unbraided hemp that is tarred well for grasping the ends of ropes to keep raveling at bay.

Today, many people recognize marline as a powerful waxed cord although it was identified as a tarred cord, not a waxed one amongst the sailors. In those days, to loosen the marline from a rope, there existed only one way of picking the marline free using an iron spike.

This act of picking was termed as marling. As a result, the iron spike used for marling was also known as the marlinspike or marling’s spike.

Almost from the initiation, marline was pronounced as mar-len instead of mar-line. This was perhaps attributed to the lack of proper pronunciations by the coaches on ships. Further, in those days, the ability to speak well was not a criterion for recruiting sailors or maritime men.

Thus, finally, the marlinspike was also pronounced as marlinespike. Despite the ambiguity, the tool’s nose imitated a spike instead of a tarred rope.

Those who can identify a marlinspike knife know it as a folding rigger. However, many other knives were designed for use on ships and boats or for people who used to spend maximum time on or around a water body. Due to this, this spike knife is likely to be known by different names.

However, most of today’s folding knives for sailors or the marlinspike knives date back to the 1905’s clasp knife, which was known as the 6353/1905 British pattern knife. It was in this year that it was accepted for use.

It was a big knife with a five-inch frame, a large spear blade, and a scary marlinspike. Interestingly, all the outlets of the British military used this knife on the sea, land, and then in the air.

This pattern knife is analogous to the initial rigging knives that were in use during the 19th century. In 1942 or 1943, the American Maritime adopted a variation of this knife, which featured a smaller pattern. Today, it has become a customary pattern that several American companies use.

Since this acceptance, this knife has not undergone any major changes. Yet, other versions were accepted and altered for the noncombatant public. With the passage of time, ergonomic designs, new steels, changing sailors’ requirements, and new materials further fine-tuned the patterned design.

Despite these versions, one aspect about a folding marline knife yet remains intact. This is the famous Z pattern that it makes when the spike and the primary blade are half-open.

A marlinspike knife was first introduced during the First World War by the U.S. Navy, as the officials knew what those at sea and on land required. This model was not serrated. However, the current variations of this heavy-duty knife have a small and half-serrated blade to promise a blade that will hardly get dull or demand frequent resharpening.

Today, both the non-serrated and serrated versions are available. They typically have a blade made using hardened stainless steel and a spike of forged stainless steel. You can still find them among the U.S. Military personnel.

A marlinspike knife features a primary blade either serrated or plain and the marlinspike tool. A serrated one will cut a net or a rope more effortlessly although it is harder to sharpen it. Such a knife is a sailor’s tool but it is also useful to adventure seekers such as divers and climbers.