Directed by Peter Faiman, the story is of an Australian man who knows how to survive in the wild using just one tool, his knife! This knife is the original Crocodile Dundee knife, which Paul Hogan wore on his hip for most of the times in the film.

While on the way to New York, when a group of knife-wielding thugs Paul Hogan, he utters the famous dialog: “That’s not a knife. This is a knife.”

In a hurry? Click Here to See Our Favorite Crocodile Dundee Lookalike Knife on Amazon

The knife shown in the Crocodile Dundee movies is similar to a Bowie knife. 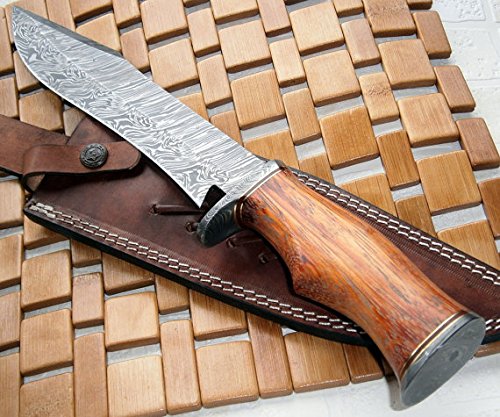 The original Dundee knife is the brainchild of John Bowring, an Australian gunsmith, and armorer, according to the different sources and references. The production studio of the film had approached him for requesting him to make a knife for the Dundee character. Bowring agreed and produced the famous Dundee knife.

It is also believed that Bowring designed a few more replicas of this original knife using aluminum and rubber materials for the film. The exact number of knives he made for the movie is still not publicly known.

Its blade was made using authentic steel, which was seen prominently in several scenes for close-ups.

The handle’s guard, as well as the pommel, was made using brass. The original knife model, along with a few replicas, featured a concealed tang design. The remaining replicas, as seen in the film, had a tangible tang design at the pommel’s base. Thus, they boasted a full tang design.

The handle was enfolded ornamentally in a sheath made up of kangaroo lace leather. There were also low-hung sheaths made up of crocodile skin leather, which were from the leather and sheath worker named Chantal Cordey residing in Sydney.

The lady has a history of making props for movies such as The Matrix, Mad Max 3, and Superman Returns. The Crocodile Dundee knife was also utilized in the subsequent series, the second film presenting Crocodile Dundee. This, too, resulted in significant demand from aficionados and audiences.

While making the requested knives for the film, Bowring had only designed two original models along with a few replicas. The original knife was utilized in close shots in the movie, while the replicas were shown in combat scenes.

Once the production of films was over, Paul Hogan and another character obtained the original knives. However, they promised never to sell them. Hogan has kept his promise. Thus, right now, the authentic bowie knife is with the hero who played the role of Crocodile Dundee.

John Cornell, the movie’s writer-cum-producer, seemingly has one made up of rubber or aluminum. As reported by theage.com.au, a replica of the original knife designed and signed by Bowring was auctioned in 2003 in London.

In 2005, one of the aluminum replicas, along with the sharpening steel as well as a sheath, was auctioned by Bonhams & Goodman, an Australian company.

The Dundee knife has stirred a passion for knives in the mind of several fans as well as gatherers. Several knife enthusiasts were stunned by this knife and desired to keep one in their collections. It is undoubtedly among the most iconic knives of contemporary history.

Those who earn their living while residing in the wild believe that this knife is the ultimate survival tool. Even several experts agree that this knife is suitable for outdoor use. The blade is made using stainless steel and is highly durable, yet if it remains in the water. The tool is hefty enough to cut branches.

The user can easily convert the knife into a spear so that it can be used in any circumstances in which it becomes indispensable to lash objects. Flashing fires and paring the skin of animals are more uses of this blade.

The Crocodile Dundee knife is also a practical tool to use against an animal attack for anyone who goes camping in a wild without choosing a designated site for camping. As the knife is shaped after a Bowie, you can rely on it for aggressive situations. However, most of us do not prefer it for this purpose.

John Bowring, at present, works as an armorer in Sydney. He is also a special effects technician. Originally wanted to be a gunsmith, he found that Australia had no such term. Yes, there was no concept of a qualified gunsmith.

Surprisingly, Bowring managed to persuade the Apprenticeship Commission to permit him to be an intern to an Austrian trained gunsmith. Until today, Bowring is the country’s only ‘technically’ qualified gunsmith.

The original knife maker was also an authorized repairer of Puma knives. It is believed that he was inspired to make the Crocodile Dundee knife from Puma 6376. If you compare both these knives, you will undoubtedly find significant similarities.

Bowring made his first entry into the world of films with his armor skills from the movie Mad Max 3. His contact with the on-screen armory started when he was approached to make some strange arms for this film.

His tools have also been used in other movies such as Mission Impossible II, The Thin Red Line, and X-Men Origins, along with a few Australian ads and TV series.

Can You Get the Original Crocodile Dundee Knife? 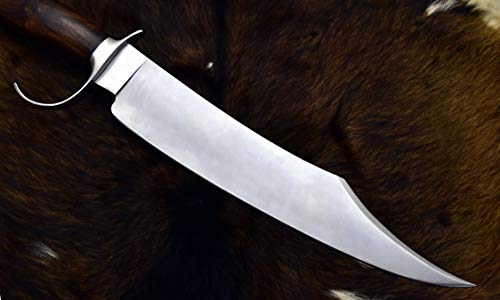 Interestingly, the sheath maker and original knife maker will never duplicate the knife because the film studio or company holds the copyrights to them. As per the records, even Bowring does not have one for himself.

Thus, no company manufactures the Crocodile Dundee knife. While it is believed that Bowring was making the knife available to some customers, they soon realized that a specific company did not mass-produce these tools.

Thus, the Crocodile Dundee knives are extraordinary, rare, valuable, and hard to obtain. It is not surprising to learn that they are expensive, and owners are likely to charge thousands of dollars if they are willing to sell one of them.

Several owners of this knife always want to hold onto their knives due to the exclusive workmanship. They also try not to use the knife, as using it would result in depreciating the item.

It has been over 30 years since this knife was famous in movies. Bowring also no longer makes this knife to make it available to the public.

So, will you ever get to invest in a true to scale version of this classic knife? Well, keeping your hope intact, a few have taken the task of making this knife themselves. Nevertheless, none of them has managed to make it quite precisely yet.

As of now, it is doubtful that you will get to see and buy a production version unless the owner owing to the original knife, decides to permit the production of this knife for collection purposes. Nevertheless, hope is still there for this knife to come out of the small screen.

Although you cannot get the original Crocodile Dundee knife, it is possible to have a similar-looking as well as performing knife.

A bowie knife, derived from the original Crocodile Dundee knife, is like a short sword in terms of look. Its blade is almost 6 to 10 inches long and is a minimum of 2 inches wide. All its versions or forms come with a brass guard that plays a vital role in deflecting an invader’s blows.

The brass guard’s end is classically designed in an upward position. The tip of the blade is generally big, strident, sharp, and quite striking. The knife’s handle is usually made using wood.

Such a knife was used by soldiers in the past. However, today, it is preferred for the outdoors. Most users consider this knife as a survival tool or as a weapon.

If you compare a bowie knife with the actual Crocodile Dundee knife, you will find a few minor changes to the latter. This sets apart the latter knife from the former one. The Dundee features half of a brass guard pointing downward rather than going upwards.

Further, the original Dundee knife has a blade with a deep groove. Even the handle is not made using wood but using materials such as leather or twine strands.

These are mostly bowie knives featuring different looks and build power. Below are these knives to consider if you are a crazy fan of the Crocodile Dundee knife.

The dialogues of Crocodile Dundee have become an important part of the Australian dialect and that he has become a global icon of the original Crocodile Dundee knife. It was this knife that he used throughout the film with a few replicas.  The style icon has imparted the significance of choosing an apt Dundee Crocodile knife.

However, the original knife is not for sale. Thus, there are bowie and hunting knives that are made to resemble this knife. Still, nothing can replace the iconic Bowie knife that is popular even today.