Derived from the trowel used in masonry work, a kunai is a Japanese tool that gained popularity after it was featured in the Naruto cartoon. It is typically associated with the famous historical ninja character.

Peeping into the history of Japanese weapons or tools reveals that a kunai knife was used for digging holes into the walls by the ninjas. It has a rich record of being used as a primary and secondary tool by manga and ninjutsu, the renowned ninja characters.

A kunai knife as a basic tool is commonly seen in martial arts but it is genuinely a multi-purpose weapon. Let’s learn more about it.

Originally, a kunai was a multi-purpose tool rather than a knife. It was usually composed of iron and had no cutting edge. While it resembled a modern throwing knife to some extent, it was not designed to act as a throwing knife.

Rather, a kunai possessed a mix of the characteristics of a prybar and trowel. Thus, its main use was prying, digging, and disintegrating the walls. Today, for these tasks, there are dedicated modern tools.

Although not a weapon, it is possible to use a kunai as a weapon today just as you would use a trowel or a prybar. As a weapon, this tool is useful for stabbing although not as effective as a knife. Still, it is primarily used as a blunt tool for hitting, confining and leveraging to take someone down.

Not all kunai knives are the same. Differences are found in terms of size. Some of them are bigger (dai in Japan), while the remaining ones are shorter (sho in Japan). These are the two widely recognized versions of a kunai.

The typical length of a kunai is usually between 20 and 30 cm. Those in Ninjutsu have a length of 20 to 60 cm, of which 40 cm marks the average. Usually, it is a heavy tool to carry.

A kunai knife is an untraditional as well as a unique tool in terms of its appearance. It features a straight leaf-shaped blade and a handle with a ring at the end and on the pommel for rope attachment. After all, a circular hole at the end is not just meant for hanging the tool after work; it has practical reasons.

When attached to the handle, the rope facilitates performance with a good grip. It can be wrapped to a stick for having a suitable spear. With this rope, you can even wrap your body for concealing it. At times, you can also use the rope as a piton or as an anchor.

The blade is usually made up of soft iron material. While the tip of the blade is sharpened, its edges are not sharpened. Still, the edges are useful for smashing a soft material such as a plaster. Today, there are many versions or forms of kunai available. Some of them are saw-toothed, thin, and wide.

It is a popular belief that the kunai knives were mainly used as throwing weapons. Although they can be thrown to cause harm, they were primarily used for thrusting and stabbing. This is as per the famous cultural tradition of ninja in which these tools are widely depicted as Japanese knives.

A kunai is often pictured in video games and manga or anime storylines as an ordinary ninja weapon. It is also a weapon that the Scorpion belonging to the Mortal Kombat series tends to use. This character uses a kunai as a spear for his adversary.

Even the character Ibuki in the Street Fighter video game uses the tool. Most ninja and video game characters intermittently affix paper bombs to this tool for triggering explosions.

The main usage of the Kunai was as a gardening tool. Surprisingly, farmers used it for this purpose. The kunai was considered extremely reliable for digging, a job that every warrior does. The knife was also used for stonework by the masons. However, the kunai blade is useful for a variety of purposes, which are as follows:

As you can guess, kunai as a multi-purpose tool originated in Japan. As per the records, it was first used as a trowel in the nation during the Tensho age. This trowel was made of iron instead of steel using which the modern kunai is made.

It was unpolished, less sharp than a knife, and extremely affordable. The knife was chiefly used as a masonry, building, and a gardening tool. People used it for prying holes and smashing plaster.

As it was not considered a weapon, the initial Kunai was not sharp. The design featured a spear-like head, a ring on the pommel, and a handle.

Later, the tool evolved to step into the world of weapons. Martial arts experts and ninjas started requesting the weapon makers to make sharp kunai knives using the hard stainless steel material. Despite this, it is alleged that these weapons were still hung in homes and spun in the dirt, masking their novel use.

Contrary to the belief of being used as throwing knives, kunai knives were used outdoors for climbing and in fights for stabbing.

Reasons to Choose a Kunai Knife

Why would you choose the kunai Japanese knife? Well, there are a couple of reasons for the same, which are as follows: 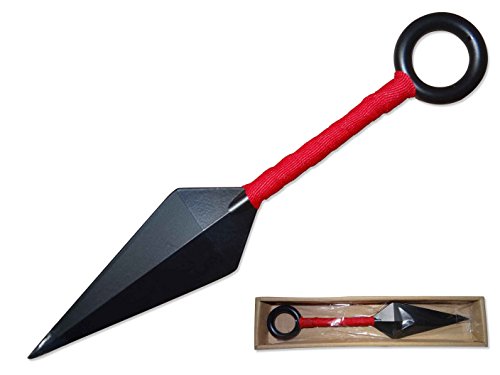 If you are a knife expert, looking at this knife for the first time will give you an impression of it being only for decorative purposes. However, this is not true. This is because it works well for stabbing and as a trowel, the original uses. You can even use for cosplay and costume contests.

This 9.5-inch kunai comes with a pointy blade that is unsharpened but is still capable of sticking to a soft piece of wood. The handle is wrapped in cloth and is big enough to ensure a good grip. The full construction is of an incredibly soft but real metal and is coated well.

The diamond shape of the blade will attract you if you are looking for a kunai that precisely replicates the Naruto kunai. All Naruto fans will love it. However, the design and weight are such that this kunai should not be used as a throwing knife. It is also not meant for use by kids. 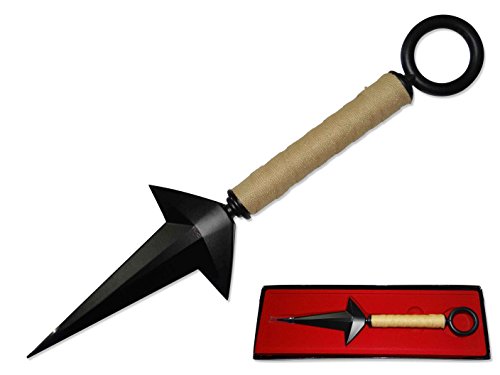 This is a ninja kunai knife designed for throwing but this needs a very careful attempt. It is 11-inch in overall size and a bit heavy due to which throwing has to be a meticulous effort. Thus, it is not meant for kids to throw but for the adults to learn knife throwing.

The knife is ideal for cosplay and costume contests. Its blade is unsharpened but still, the user needs to be careful while using it, as it is quite pointy. The blade’s shape makes you recall a sword due to which it sets apart from the rest of the kunai knives.

The overall construction is of metal with the handle wrapped in cloth and attached to a sturdy ring. 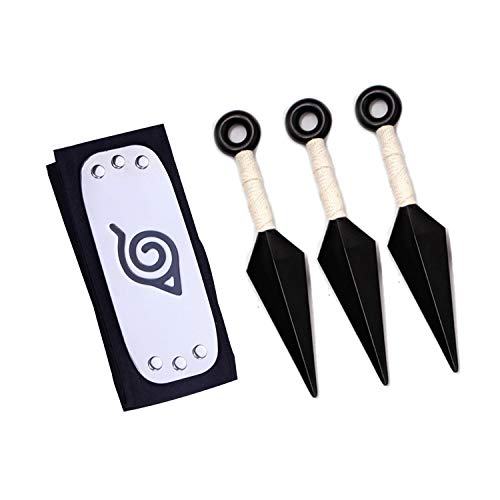 This is a Naruto set that comes with a long Shinobi headband and three big kunai knives. While the headband is made up of an ideal mix of leather for padding, nylon, and bendable metal, the knives are made up of plastic.

All the materials in use seem to be of high quality. This becomes evident when you use the items. Consider this ninja big kunai set if you wish to be a part of a cosplay party or a Halloween costume contest. It is just ideal for children who intend to cosplay Japanese ninja.

The headband is very long due to which there is no need to worry about its fitting. For fitting to your head’s shape, just slightly bend the metal plate. That’s it! The headband is flat due to which it is essential to contour it to your kid’s if the risk of tearing bothers you.

On the other hand, the kunai knives are short, as they are only 5.1 inches long. Still, they are pointy due to which kids should not use them in the absence of adult supervision. As they are small, they are meant to be held not like a knife but in between the fingers.

A kunai knife is a multi-purpose tool that is useful for a variety of daily routine tasks. Nevertheless, they are commonly seen in throwing knives contests and martial arts. It is also the most famous weapon that all anime and manga characters use due to its status in the Japanese culture.

There are different varieties of kunai knives available online. You can also buy them with other Naruto or ninja accessories as a set. However, you should buy the one that best fulfills your purpose or requirements. Many of them are only meant for cosplay, while the rest are for some practical uses like throwing and stabbing.