Belonging to the category of brandless knives, a nakiri knife is a time-honored vegetable knife with its origins in Japan. Unlike other kitchen knives, it is possible that you may not have seen or worked with it before.

Now that you have heard of it, you may be thinking what is a nakiri knife and why is it used in a kitchen. Natively popular as nakiri bocho knives, a nakiri knife is a purely vegetable knife.

The term ‘nakiri bocho’ in Japanese indicates a knife that chops or cuts greens. This gives the answer to what is a nakiri knife used for. Yes, it is exclusively for finely cutting vegetables.

This Japanese-style knife looks much like a cleaver, but it differs significantly, as the latter has more weight as well as is sharper to penetrate through the tougher items such as meat. That said, let us delve a bit deeper to know more about this knife so that you can consider adding it to your kitchen toolbox. 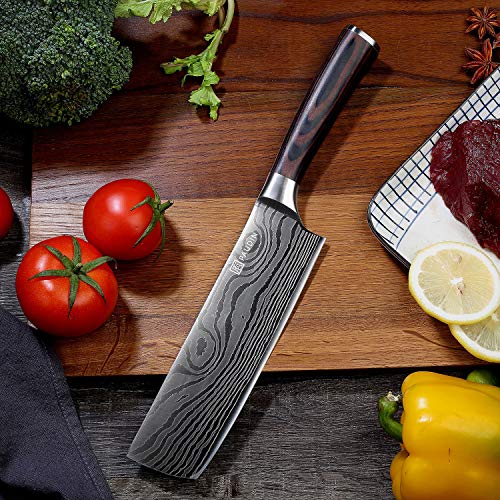 Featuring a lightweight body and a thin blade profile, this knife is a double bevel-edged tool. It is primarily utilized in home kitchens for efficiently slicing, cutting, and mincing all vegetables and fruits. Featuring a distinct tip and a straight blade edge, a nakiri knife facilitates cutting until the surface of the cutting board.

One of the unique aspects of this knife is its blade design. The blade remains flat on the cutting board instead of featuring a camber from front to rear. In other words, with this knife, you will cut by going straight up and down instead of rocking the blade forward and backward.

The flat and thin blade profile makes it easy to move through vegetables. The straight blade allows you to utilize the whole cutting surface. The edge is as sharp as a razor but as thin as a piece of wafer. With such a blade, you can not only finely cut but even accurately dice a carrot or an onion.

In Japan, a vegetable knife is either an Usuba with just one-sided grind or a Nakiri featuring a double-sided grind. You can identify the latter by its rectangular blade. A nakiri knife has a slightly rounded tip so that you can swiftly chop from an angle. In simple words, this knife facilitates fine cuts whether it is a vegetable or an herb.

The double-side grind makes this knife suitable for both right- and left-handed users. However, there are some models that are an exception to this fact. Thus, it is wise to pay attention to whether a promising model is a single or double-edge grind at the time of buying a nakiri.

Although being often mistaken for a cleaver, the thinner and lighter nakiri is just not meant for heavy-duty cutting such as cutting meat or chopping hard materials. The steel is much thinner due to which chopping is likely to damage the blade.

Thus, it is getting popular among vegetarians, as more and more people are choosing healthier options for their daily meals.

Designed especially for chopping vegetables, the Japanese knife, Usuba, is a single bevel-edged substitute of nakiri. It comes with a thicker and heavier blade. A few Usuba models even come with a longer blade.

Like the traditional santoku, a nakiri typically has a bit taller blade than a petty or a gyuto knife of the same size. As a result, you get somewhat more clearance for your knuckles while chopping directly above the chopping board.

A unique benefit of the nakiri’s rectangular blade profile is that, unlike the non-rectangular ones of the gyuto and santoku, this one does not become considerably shorter as you sharpen it repeatedly. The sizes of 165 and 180mm are popular nakiris at present.

At the same time, the knuckles of your free hand also get the benefit of a good blade surface for guiding the blade while pull or push cutting or while tap chopping.

Top Nakiri Knives in the Market

Here is our guide to the top nakiri knives in the market.

Evolution of the Nakiri Knife

For those who are truly interested in getting a nakiri, it is worth knowing the history of this knife. This is because it is the only way to genuinely comprehend anything on this planet is to peep into its past and know from where it came.

In its early days, knives in Japan were much like the small samurai swords. Many people love cutting veggies using a small samurai sword although it is a bit risky to do so. The most ancient knives in the country belong to the Nara period of the 8th century. They were sword-like tools, which were used widely until the 17th century.

From this century, the whole picture changed, and new, modern knives were designed. The nation’s government removed all the hurdles and laws to allow foreign items to enter the nation. In the knife industry, this allowed the introduction of western knives for the first time.

The in-house knife makers, after seeing these imported knives, decided to make something quite similar. The introduction of new, foreign knife in the nation resulted in in-house designs of sharper and thinner knives.

One of these knives or the results of the kind decision in the 17th century was the nakiri knife, one of the outstanding knives born during this period. A few other knives were Yanagiba and Deba.

The nakiri’s design was based on an ancient model of a vegetable knife whose design was tweaked for a better look and feel. Even today after 400 years, a nakiri is still popular and is widely used although the original design has hardly undergone any change. This is something you cannot say for smartphones.

Reasons Why a Nakiri is Ideal for Cutting Vegetables 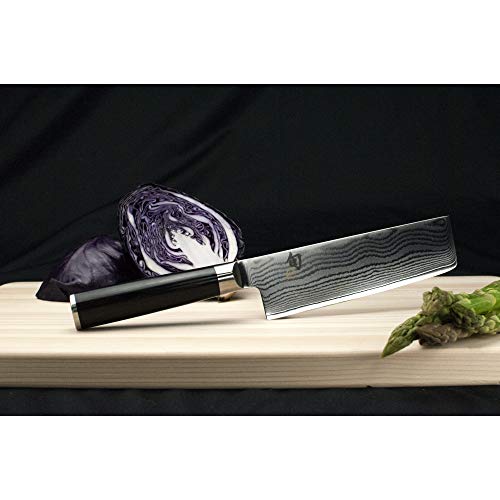 Both a nakiri and a cleaver perform the same type of cut. However, the former cut is more suitable for any vegetable.

A nakiri is, thus, just for dicing, slicing, and chopping veggies. You can also use it for performing the same tasks for fruits and herbs.

Using a Nakiri for Cutting in the Best Possible Way

You need to follow a specific pattern while using a nakiri knife to chop veggies although the straight tip makes it simple and easy for you to use the knife. Keeping in mind that you need to move the knife only up and down, following are the steps of using this knife:

It is vital to note that you may need some practice, in the beginning, to get accustomed to this knife and hone your skills for the same.

Being Intimidated by a Nakiri? Here Is Why You Should Not!

It may be so that you feel intimidated by a nakiri knife due to its appearance or some previous bad experience. Well, there is no need for you to feel so, as the fact is that you do not need to learn any special or advanced technique to use this knife for cooking.

Although there are ways to use this knife, it is totally your personal choice to learn them. It is just not mandatory to do so. The most motivating aspect of this knife is that its use is in trend at present.

The Other Uses of a Nakiri Knife

You may be eager to know whether you can use a nakiri knife for other cutting or kitchen tasks. While you can use it for other such tasks, it is specially designed for cutting vegetables.

There are other kitchen knives dedicated to just a single task, such as the butter knife. While you may try and cut a vegetable with a butter knife, it is easier to do so using a knife designed for that task.

Thus, while a nakiri can be used for applying butter on a piece of bread or chop some cheese, it is wise to keep it reserved for its intended purpose.

Here, just visualize a nakiri as a vegan tool. Thus, such a tool will be more pleased to handle some vegetables. It is just ideal for salads, as all ingredients coming from the category of vegetables need to be truly thin. With a nakiri, you can get this output even for lettuces, radishes, beets, and carrots.

The Difference between a Santoku and a Nakiri 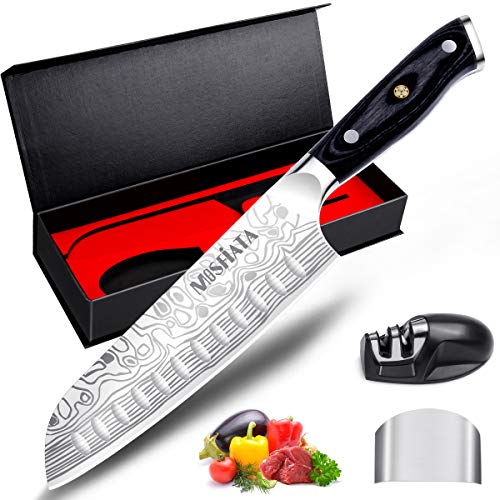 If you are planning to buy Japanese knives, your research for the same will often highlight santoku knives. Just as a nakiri, a santoku is used daily in most kitchens across the country. A santoku is a general-purpose tool and it means ‘three uses. Thus, it is used for dicing, slicing, and mincing.

Both these knives, although used daily, tend to differ significantly. While lightweight, their blades have different shapes.

The blade of a santoku is a bit beveled due to which it is possible to trigger a rocking motion while chopping. On the other hand, a nakiri cannot provide a rocking motion due to a straight, flat blade.

Further, a santoku is also used for cutting cooked hams despite its primary use of prepping. It also features a bit more versatility than a nakiri due to its pointed edge and curved blade.

A nakiri is better for cutting short, thin strips of onions or peppers or onions. It is also ideal for prepping eggplants for salting. On the other hand, a santoku is better for making fancy cuts.

Top Santoku Knives in the Market

Here is our guide on top santoku knives in the market. Alternatively you could refer the table below

You can easily sharpen a nakiri knife at home if you know the basic knife sharpening skills. More than one way exists to shape a nakiri. Here are your options to sharpen a nakiri:

Taking Care of a Nakiri

Sharpening a nakiri in the right way and at the predetermined intervals is just half work done when it comes to taking care of your knife. Taking good care of it also involves some more simple things to remember and follow.

Doing so gives you the ultimate cutting result whenever you use the knife and increases the knife’s lifespan. Here are those simple things to follow:

A nakiri knife is what your hands need for making cuisines featuring evenly and neatly chopped vegetables. If you wish to cut veggies like a professional or are a vegetarian, it is a must-to-have knife in your kitchen.

There are different models of this Japanese knife being available from different brands. Thus, you should choose what suits your requirements. Still, your choice should not be such that it compromises the authentic performance.