Used not only for cooking but also for oil painting, a palette knife is one of the flexible knives. It is a broad and flat knife that is surprisingly not meant for cutting but for spreading, may it be a paint color or a spread on the cake. Read ahead to know more about this knife used in both bakeries and painting rooms. A palette knife typically features a long, straight spatula or blade for mixing colorful paints on a palette and scraping a palette or a bowl so that they remain clean. It is certainly not for painting on a canvas or cutting eatables. It’s rounded, pointed tip that is bent a bit like a trowel is ideally meant for painting on canvas.

When in the kitchen, a palette knife is also known as a frosting spatula. This kitchen utensil is useful for spreading something on a flat surface, such as a spread on a sandwich in bulk.

A palette knife can be made using wood, metal, or plastic. The most economical ones are usually made using solid plastic, while higher-quality models are usually of metal (stainless steel).

The knife usually has a fully straight or slightly bent handle. Such a handle indicates that the knife is a palette knife. At times, you can even recognize it by seeing a big crank. This design ensures that your knuckles stay away from wet paint or edible spread that you have just applied.

This knife usually has a semi-flexible blade made up of steel or other metal and a handle of wood, although plastic models are also commercially sold. The blade may be in the shape of a diamond or pear.

Although these tools belong to the category of knives, they are not meant to chop unlike the craft or kitchen knives. Their blades interestingly have a blunt edge like a butter knife. However, you still can get models with a serrated edge or a sharp point.

In a nutshell, a palette knife is also a painting tool featuring a handle and a blade. These knives are available in a variety of sizes and styles. The blade’s size is directly proportional to the painting effect that a user can accomplish.

For example, a short blade results in sharp strokes; while a rounded blade gives you dabbing spots and a long blade supports stretches of color. If the blade is sharply pointed, you can scratch it into the painted surface. 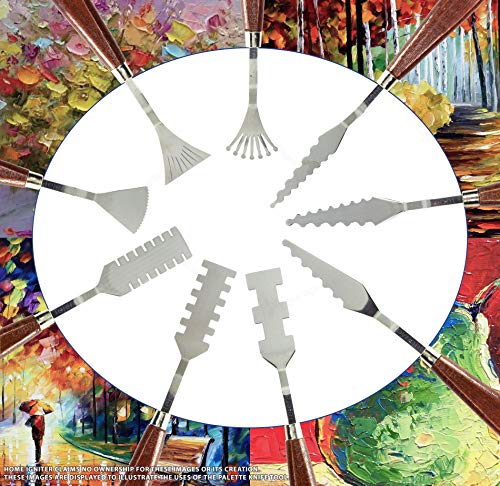 A palette knife a round-ended spatula that features a thin and flexible blade useful for applying oil or acrylic paint, mixing different oil paint colors, and scraping off oil paint. When used in a kitchen, the blade spreads icing or scrapes out a mixture from a container.

This knife is not just for mixing paints but also for making some amazing effects while you paint. These effects are otherwise impossible using a brush. A few artists do not use the brush to give full scope to the palette knife. Following are some common uses of a palette knife in painting:

For painting with a palette knife, start by squeezing paints on it. Dab, crush and mix the colors until you get the desired level of uniformity. For adding another color to the mixture, do start by cleaning the knife first with a paper towel or cloth.

Top Palette Knives in the Market for Painting 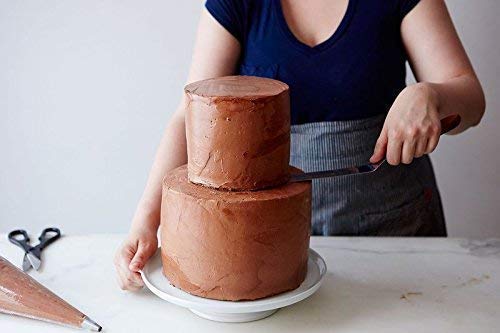 In kitchens, a wide, flat palette spatula with a dull blade edge and rounded tip are used for lifting and smoothing. The blade is thin but strong. It is usually around 14 inches long and it is recommended to choose the longest blade for using a palette knife in a kitchen.

Some models also come with a bit serrated edge for slicing cakes and other bakery items without leaving behind those unwanted crumbs. Following are some of the common uses in kitchens:

For the frosting, apply the knife light pressure such that it touches just the icing and not the cake’s surface. Then, spread it in a continuous motion instead of in a forward and backward motion. For making peaked or spun effects, dab the food item using it in random spots.

Benefits and Limitations of Using a Palette Knife for  Painting

Following are the pros or the benefits of using a palette knife:

Following are the cons or limitations of using a palette knife:

Why Use a Palette Knife for Mixing Paints, and Not a Brush?

It is okay to use a brush for mixing paints but doing so reduces the lifespan of your brush. Mixing paints with it twists or crushes the smooth shape of its bristles. Further, it is genuinely challenging to thoroughly mix several colors using just a brush.

Not all paint colors will mix well due to which you may end up with unwanted colors leaking from your brush at the time of painting. So, now you will use a palette knife for mixing paint colors, right?

Okay! However, that does not mean that you should never use brushes for paintings. The bottom line is that you need to strike a balance between these two tools. If you use both for the designated purposes, the result you get is truly awesome.

To be specific, you will get a few stunning contrasting effects in your paintings. At the same time, however, you do not need much contrast. You need all the painting elements to work together. Thus, you need to maintain a balance while using both these tools.

One of the techniques to do so is to run the knife over the tangible brushwork and soften the edges of knife strokes using a brush. While doing so, ensure that none of the two dominates your painting nor both should have an equal share in your painting in terms of appearance to prevent any confusion. Such a balanced use initiates an elusive bond between the tools.

In short, if you are using a palette knife for most painting work, do include a few small areas of tangible brushwork to make things distinguishable. If it is vice-versa, consider splitting with small areas of thick strokes by your knife, which matches with the painting. Avoid putting them just for the sake of putting.

Palette knives are often interchangeably used with painting knives. However, they both are different knives. As the name indicates, a palette knife is exclusively made for mixing paints on a palette prior to applying them to a canvas.

Palette knives are symmetric. Just as painting knives, they too have no sharp edge but do come with a slight crank between the blade and the handle. However, they differ in terms of use. A palette knife is for mixing colors, while a painting knife is for applying paint colors and pastes onto a canvas.

A palette knife is used for both cooking and painting. It is usually a small tool with a sharpless blade and a bent handle. It is worth buying a couple of palette knives made up of metal, as you would normally need more than one such knife and that the plastic models are usually cheaper in terms of quality.