As the name indicates, a railroad spike knife is a knife made by forging a railroad spike. The latter is a special nail that is commonly utilized in railways as a critical part of the rail fastening system. The nail is typically used for fastening the rail track.

As a matter of fact, railroad spikes are usually free and readily available for making a variety of small tools, including useable knives. They are increasingly in use for designing a few metal artworks including bottle opener and furniture items.

A railroad spike knife is a predominantly a novelty item that is usually forged for pleasure. Yes, for most people, it is a knife for looks and fun. However, it is useful as a weapon for even attacking someone.

Most of its models are made using hand due to which the appearance and size tend to change from one model to another. This post is dedicated to reveal some interesting basics of this knife and how you can make one on your own at home. 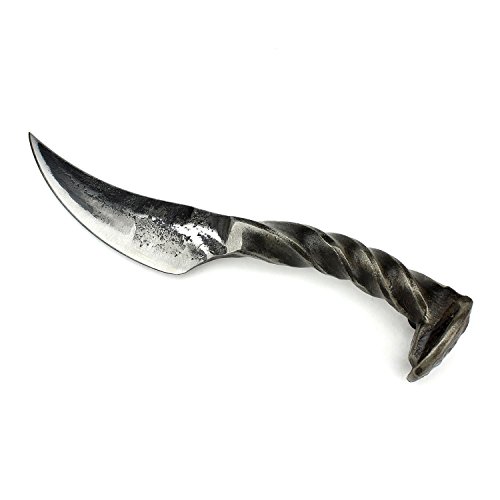 Why a Railroad Spike for Making a Knife?

A railroad spike is commonly chosen for making a knife due to its conductive properties. While holding a railway track firmly in place, the spike is resistant to wear and tear. This means that it is tough as well as strong to perform its job.

Second, unlike a shattered spike that cannot hold a track and is tough for it to be too hard, a bent rail spike is still capable of doing its job. This means that the metal using which the spike is made must be soft enough to twist without being shattered.

This property of soft metal build makes forging a breeze. Yes, metal spikes are superb options for forging. Thus, you can easily create forged knives. These spikes feature a favorable size to work with for forging and are quite malleable.

However, care should be taken to prevent hitting the spikes when they are cold. Otherwise, they are subject to cracking, although it is dependent on its concrete composition.

Luckily, a few spikes can bear cold, while the rest tend to break quickly while hammering below 1200 to 1500 degrees Fahrenheit. While retaining them hot, try hitting them once they tend to glow. This is the key to get a good railroad spike knife.

Two types of railroad spikes are popular, which are lower carbon and higher carbon. As a fact most quality blades are composed of relatively high carbon steel and are tempered after hardening. As a result, you get flexible, strong blades with a hard edge to remain sharp.

Remember, when a piece of steel composed of high carbon is heated to make it harder, it also simultaneously becomes more brittle. So, while making your railroad spike knife, do not hit hard using a hammer or else it will crack.

Which Metal Is Used to Make Railroad Spikes?

Well, this is a common question by all those who love forging and making forged knives. The best part about forging is that you can convert a piece of metal into almost anything else, provided the metallic composition is in line with the intended use.

It is vital to note that it is not high carbon but higher carbon. If you compare, the carbon level is not so high. These three categories are specified as per the ASTM A65-07 standard. This standard controls the railroad spikes’ requirements.

How to Choose a Railroad Spike for Making a Knife?

Almost all bladesmiths know to make knives using railroad spikes. However, there is a high probability that these spikes would not have enough carbon for having a strong blade. A great myth comes from a common misunderstanding that these spikes are High Carbon (HC).

Well, the issue here is that the interpretation of the term HC for the railroads is what a knife maker terms as Low Carbon (LC) mild steel. As per the specifications by the American Railway Engineering Association (AREA), only two categories of railroad spikes exist.

On the other hand, steel blades for knives usually contain 0.85 to 1.5% carbon, which is three to five times more than what is there in an HC railroad spike. The reason for this gap is that for railroads, mild steel spikes are preferable, which would bend and not break. A bent spike is still capable of grasping the rail track, while a broken one will not.

Therefore, a spike with a label of HC is likely to have around 0.4% carbon, which is equivalent to 1045 steel. Those LC spikes are fundamentally made up of mild steel.

The 1045 steel is heat treatable and is looked upon as workhorse steel. In other words, it is tough and is capable of bearing load. Thus, you will see it in heavy-duty gears and shafts. However, it is not used widely for cutting tools, as it cannot hold an edge that well.

In a nutshell, rail spikes are likely to contain less carbon due to which they will not get as hard as desired. At times, they are made up of an alloy to include copper to boost their malleability as well as prevent cracking.

As per what most people have found, the low carbon models have been in use in the past five decades in most regions across the globe in favor of the higher carbon, tougher ones.

The railroad spikes are, however, available in different variations. So, not all spikes are made up of insufficient carbon content.

Usually, unless you are investing in new spikes that are certified, it is almost impossible to find out what is inside them. If you have a metallurgist friend, you can find this out easily. Everybody will just not have one such pal for sure.

What you now need to remember is the fact that truly old models could be made of anything. You can even find a pure iron composition. So, how do you know from which an old spike is made up of? Well, for this, you need to test it a bit.

As a part of testing, consider heat-treating an old spike to see if it is possible to harden it. As no spikes are made using steel of high carbon, it is impossible to obtain a regular file for gliding across the hardened metal. This gliding is only possible when the metal is tougher or firmer than the file.

However, the railroad spikes are not so hard. Still, you will not be able to find out what the exact composition is by only heat testing. This is because there are many spikes made using low alloys with manganese and copper.

If you are truly serious about knowing the composition and need a rationally accurate method for identifying the level of metal hardness, you may not mind spending some money.

You can buy some exclusive hardness testing files and add to your toolbox. This option is the most affordable way of testing different hardness levels on your own. Having one such kit of files is useful, as it is wise to determine how hard a spike is prior to making a blade.

If you do not want to test, just do not go for any old rail spike that is too rusty. Then, the only reliable way to get the spikes for making knives is to grab from the leftovers thrown out after rail repair jobs.

If this is not possible for you, consider buying the new spikes available at affordable rates. You can even buy them in small quantities.

Making or Forging Your Own Railroad Spike Knife

Learning how to make or forge your railroad spike is also one of the initial projects that one can take while starting with blacksmithing.

Yes, there is no need for in-depth guidance for this DIY task. It is easy to visualize the intended knife’s shape and then hammer it to get the result as per this visualization.

It is that you will have to take all safety precautions such as wearing gloves and eye protectors. Otherwise, you will end up burning yourself or cutting your finger. Following are the steps to make your railroad spike knife: