It is true that general-purpose knives are versatile and are in great demand. However, at times, you will not require such a knife. What you will be looking for is a specific knife that does just one thing exceptionally well or is exclusively made for performing a certain task.

If you are looking for a knife that is ideal for stabbing tough things, a tanto knife is what you need. Originally made for armor piercing, this knife is analogous to a Japanese long and short sword in terms of style.

Yes, a tanto knife is a conventional Japanese short sword having a sharp, pointed blade whose length is within 11.93 inches. It is used in feudal Japan. Let’s explore more about this knife in this post.

Some fans may get upset from a few details disclosed in this post but then most readers are less likely to seek information on the conventional tanto. They are more likely to be interested in the modern elucidation of the blade shape.

If you are looking for our favorite tanto knives read this. Overview of a Tanto Knife

A tanto knife is famous as a Japanese short sword. Used by the popular Samurai clan as an ancillary tool of defense and slaying, the blade is recognized for its great strength and power as well as quality pommel. These swords are forged using the hira zukuri technique and possess a full flat grind.

All these elements contribute to the blade’s reliable functionality and durability. Although originated in Japan, the modern tanto is known as the American or westernized tanto.

It is relatively a newer shape of the blade that has gained popularity with the dawn of the modern tactical knives. The modern shape is a Japanese-inspired pattern that is like a conventional tanto or katana of yesteryear.

Over the years since inception, the tanto knives have become a bit more ornamental in terms of look. However, they are as functional as the traditional models such that they have penetrated the North American markets. Many such knives are used as tactical tools by different army personnel.

The tanto blade was chiefly designed as a killing tool during the Heian era between the late 8th century and 12th century. This was the period when the Fujiwara family gained power and control over the nation. Thus, it was obvious for them to gain protection from protesters.

Their soldiers were called the Samurai who utilized a tanto blade as a survival and combat knife. Originally, a long tachi sword was in use in outdoors as a combat weapon. However, it did not work effectively during house combats or narrow hallways.

The tanto blade effectively overcame these limitations due to its strong build. Its thin blade played the stabbing role in close-quarters combats. It was forged to ensure that none of its sides had ridge lines, making it differ from a katana blade.

Although used primarily for stabbing, the razor-fine edge was also useful for slash cuts. Even the Japanese women used its smaller version, popularly termed as the kaiken, for self-defense.

During the late 12th century and early 14th century, more artistic Tanto knives were designed. From a tool-like look, the blade took upon a more ornate appearance.

There were dedicated bladesmiths who designed new blades varying in terms of width and style. This period marked the authentic evolution of blades. However, this rise was just for a short period.

The period from 14th to 16th centuries witnessed a lot of fighting due to the decline of the famous military government, Kamakura Shogunate. With this, the evolution of ornate versions of tanto blades halted and the existing ones started to fade.

Now, they were only designed to fulfill the requirements of the Japanese soldiers. These blades were narrower than the original ones. The reason for this shrinkage was to make surplus material available for making more combat tanto blades.

All the decorative aspects were eliminated, and mass production of these blades started to keep pace with the warfare needs. Post World War II, it was prohibited to use blades in the country.

However, the initiatives of European as well as American blade buffs resulted in a revival of these tools during the 1960s. Thus, today, there are new tanto blades and other blades inspired by its design from American companies as Cold Steel.

From the period between the late 1970s and early 1980s, Cold Steel reinvented and popularized the tanto blade. The company was the result of admiration for the Japanese craftsmanship.

From this period, more new swords became popular as Shinshinto. Then, in the late 19th century, tanto blades took the form of Gendaito, which belong to the category of modern swords. Then, the mid-19th century witnessed the discovery of Shinsakuto, which are in use even today.

Even today, a tanto knife is used in conventional martial arts. It is still a functional and potentially lethal knife. 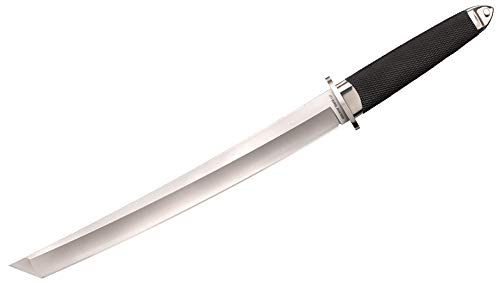 A tanto blade features a flat grind and a high point resulting in a genuinely strong point ideal for piercing hard materials. The thick point holds much quantity of metal close to its tip due to which it absorbs the impact from frequent or recurrent piercing that otherwise results in breaking the knife.

The knife’s sharpened front edge greets the unsharpened rear edge at an angle instead of a curve. Therefore, a tanto knife has no belly, which is replaced by a fiercer tip. As there is no belly for slicing, a tanto knife is not ideal as a general utility knife.

Nevertheless, its exceptionally strong point makes it ideal for use in tough situations where stabbing tough materials is indispensable. The latest designs, especially the ones designed in the U.S.A, are typically of the single edge style.

Most modern tanto blades today reflect the design of Cold Steel.  This design is also seen in many common Every Day Carry (EDC) knives.

The conventional American tanto is approximately 6 to 12 inches. It contains two bevels, of which the straighter, longer one reaches the handle and the vertical, shorter one is at the front. You can find these knives in either single or double-sided versions.

However, the USA models are single designed. This is because they are preferable by countless people over the double-edged tanto blades.

Today, the Cold Steel company still designs the popular tanto models. The key difference between these models and the conventional Japanese version is in terms of the tip. The former ones have a stronger, angular tip and two separate edges. Even the American models are available in different variations.

Both the original and modern tanto knives feature strong tips due to which they are ideal for piercing cuts. Stabbing is where a tanto blade outshines. Its robust piercing tip is admirable for its ability to penetrate and pierce. Therefore, tanto blades are seen in several combat and tactical knives.

The blades fit well and appear cool in the tactical knife design. Apart from that, they are useful for self-defense or in martial arts.

The blades look exotic and help in daily jobs such as opening mail, cutting rope, and helping in preparing food. With the impression of being designed as a weapon, tanto knives are not meant for bushcraft tasks such as wood carving.

Pros and Cons of Tanto Knives

Just as other knives, a tanto knife also has its pros and cons. They are as follows:

Despite these great benefits, a tanto knife has two drawbacks. They are as follows:

A tanto knife is not confined to have just a standard tanto blade. There exists a myriad of tanto blade styles. Here are some of the most popular and rarest designs to consider.

In terms of mountings, two types of tanto blades exist, which are aikuchi and hamidashi. Aikuchi is regarded as a koshirae that has no handguard but a simple wooden handle and a kashira made using animal horns. The hamidashi, on the other hand, does have a smaller handguard.

Is It Truly Hard to Sharpen a Tanto Knife?

The answer to this question is that It Depends! If you are on the field, just a stone is fine to sharpen the knife. Otherwise, there are a few aspects of tanto blades that are likely to make sharpening more challenging for you.

The first aspect is the blade’s straight edge. While this edge existing in an American tanto is likely to give you an impression that it is easy to sharpen, it is not so in reality. In fact, it can be a bit tough to sharpen a straight edge nicely.

The biggest challenge here is to retain a uniform angle and pressure across the stroke, which is required for a consistent straight edge. However, if you know the basic sharpening skills and can perform them decently, you can sharpen a tanto without any hassles. It is just that a tanto knife is a bit different and is likely to make you practice for some time.

The other aspect that makes it difficult to sharpen a tanto knife is its two edges for sharpening. These two edges are the main edge and the other running from the ancillary point to the tip. As per the chosen method of sharpening, you may feel a bit uneasy to sharpen this ancillary small edge.

Still, it is not too difficult or an impossible task to sharpen tanto blades.

Is There is a Reverse Tanto Blade?

Yes! A reverse tanto refers to the shape of the blade that gained people’s attention with the introduction of Benchmade – 940 , an EDC knife by Warren Osborn. It is basically an American Tanto flicked upon its head such that the angled tip is on the knife’s spine or the top side.

The edge is conventionally curved and comes with some belly. The appearance is distinct, and the knife is likely to have a stronger tip than that of a drop-point blade. Following are the two types of reverse tanto blades:

Overall, there are no design rules applicable to reverse tantos. Thus, there are many other manufacturers who have designed blades like both these reverse tanto styles. However, obviously, there are differences such as the tip’s location.

Therefore, none of the tanto designs are definite or act as the standard. What’s more, is that the design of Benchmade 921 looks much like the Dozier’s model. However, the knife was termed as a Modified Wharncliffe.

In a nutshell, tanto knives encompass a distinct blend of old and new styles. While the look is visually appealing, they are reliably functional and are perfect for tactical scenarios. However, their usage will vary according to your preferences as well as requirements.

By investing in a tanto knife, you will be among those distinct people who love to have a blade that is exclusively designed for piercing difficult-to-penetrate materials. In any sudden, unfavorable situation, the knife keeps you ready and safe.