Butterfly knives have quite the complexities with the legal system in many parts of the world. Even different states in the US have different rules concerning these knives.

What are butterfly knives?

The other name for Butterfly knives is ‘Balisongs’. It comes with two handles counter-rotating around the tang in such a way that when it is closed, the blade is hidden within grooves in the handles.

Why the butterfly knives were originally invented?

Butterfly knives were originated and invented in the Philippines as a pocket-holding knives, meant for self-defense and utility blade. However, they were used more like a weapon than a tool. Criminals used them more for fulfilling their heinous activities.

However, now people are trying to break the ‘stereotype’. Since, young people have developed an interesting association by showing their passionate and versatile side to the world with various tricks like ‘flips’, ‘air-catch’ and more.

What makes butterfly knives illegal in few places and not in others?

There isn’t a clear-cut law that provides a specific guideline in favor or against the butterfly knives. This has been said where many states do consider them as illegal. The laws associated with butterflies seem to be ill-equipped because of lack of information and considering the world of today, they seem to be equally outdated as well. Hence, there needs to be a universal stand that can collectively be symbolic as a mark to say that these are actually not that dangerous, unlike the perception of authorities.

Butterfly knives carry with themselves the preconceived notion which dates back to the ‘80s when they were used for crimes. The United States has seen quite a several similar incidents back then when they were exported here from various Asian countries. These knives offer an extremely easy option to threaten anybody. Still, they can indeed be easily handled and hidden for undertaking crimes.

However, a lot has changed now, but the biasedness remains against them due to the following reasons:-

It was attributed because, the butterfly knives have an extreme sense of appeal where youth can’t keep themselves away from recreating themselves, as it gives them a high degree of pleasure. However, due to the learning phase, they have injured themselves as the bruises were notably visible but many of them didn’t visit the emergency rooms due to stringent laws enforced.

What are the states where authorities consider it legal? What are butterfly trainers? 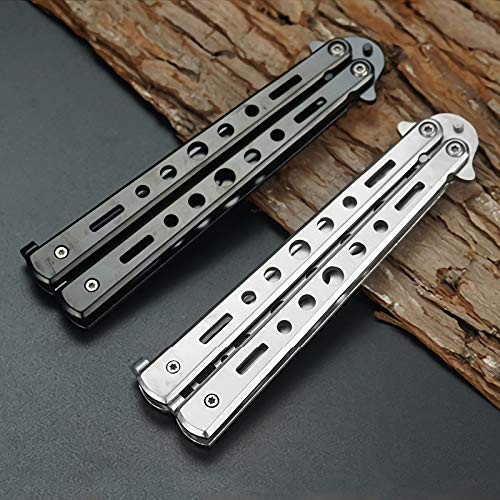 Butterfly trainers are nonlethal, safe, unsharpened, and most importantly the legal versions of the actual butterfly knives. They are readily available across most retail shops locally and online. These are useful for learning how to use the real one without all the cuts and bruising to the hands.