Popular ancient knives, including the Puukko and Sami, come from the northern Scandinavian nations. Aboriginals such as the Vikings and the Sami used these tools for more than one purpose.

Featuring a Scandi (flat or zero) grind in common, these knives, even today, are used for carving, bushcraft, and utility tasks. One such knife that is famous for its ultimate bushcraft abilities is the Yakutian knife.

Just like other Scandinavian knives, this one is designed and used by an indigenous community from the Sakha Republic region in northern Siberia. This ethnic group is called the Yakut.

It is known to have sustained a flourishing blacksmith tradition for several decades through which it has introduced a myriad of edged tools, right from carving knives to spear points and swords.

Blacksmiths were integral to the ancient Yakut culture. They are the esteemed people admired for their ability to convert metals into weapons and tools. Of all, the tradition of knife making was strong due to which unique knives are produced even today, and the Yakut knife is among them!

For many centuries, knives as tools have played a bigger role in the lives of the Siberian aboriginals than all the jewels. The significance of knives to these natives becomes evident through an adage, “Knife, my third hand.”

As tools, knives have been an imperative friend of any craft maker. They are used even today for hunting, fishing, and kitchen tasks. A craftsman also uses a knife as a wood planer. A Yakut knife is one such versatile and revered tool. 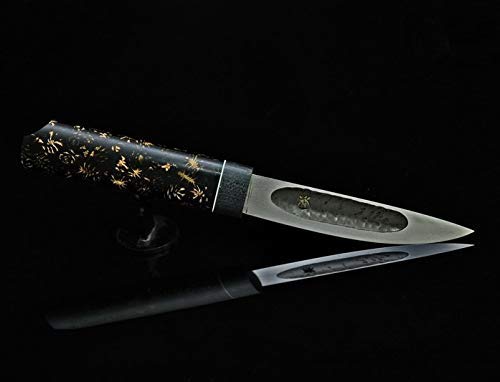 A traditional Yakut knife is looked upon as the symbol of Siberia just as Yakut diamonds, Siberian tigers, khomus, or hardened tusks of mammoths. It is a native heritage of the Sakha people apart from the diamonds and mammoths. For them, the tool is both a weapon and a piece of embellishment.

Made for a very long time, this knife is widely used even today for many economic activities of the native people. To be specific, it is mostly used for simplifying long and careful tasks such as mending broken sledges and removing meat from bones.

A Yakutian knife has been in use without major design changes. It is said that having one such knife is a learning experience. Why so? This is because of its blade’s concave and convex geometry featuring a hand-forged or mechanized fuller one side.

The typical ones feature a blade that is 4 to 7 inches long and 1 to 1.5 inches wide. An atypical feature of this tool is its asymmetrical blade with one side having a convex edge and a straight bevel and the other having a chisel grind and fuller as a groove in it.

The groove makes the blade less heavy and facilitates a blacksmith to use less quantity of metal required for crafting a larger blade. The blade is conventionally forged using iron ore obtained from a local site and them melted by the local but expert blacksmiths.

The blade is razor-sharp on the edge while being almost straight at the rear back. It remains sharp for a long and is also easy to sharpen, especially if it is made up of metal such as steel.

The modern Yakutian blades are made up of steel. Keeping the shape in mind, this blade is likely to take some time to get used to. The striking blade is believed to follow the design of hollow bone knives used by the native Siberians such as Evenks or Evenki.

Its shape is like an arch being formed in the cross-section to ensure massive strength along with a convex grind to its left and a hollow-forged chisel grind akin to the Japanese Kiridashi to its right. This is the standard model for right-handed users.

Thankfully, Yakutian knives are also modeled for the left-hand users in which the aforementioned shape is exactly the opposite. The ambidextrous blade works with meat, fish, skins, hides, wood, and for combat. The handle is thick and untampered, is typically made using birch burl, and features a flattish oval area.

Its cross-section reflects the shape of an egg. Due to the birch material, the handle fits well into the hand, even if the latter is inside the gloves, which are indispensable in a temperature of -50 degrees Celsius.

The material also safeguards the hand from the cold effect of the blade steel when it is too cold, a common weather condition in Siberia. The Yakut tribe uses many other knives that have this design and shape.

In common, they all possess a straight handle looking like an egg and is comfortable in hand. Each knife has its sheath that the Sakha people make using leather, wood, or hide along with a wooden insert and is akin to the sheath of the Puukko knives.

Modern Yakutian Knives and From Where to Buy them?

There are not many Yakut knives available for you to purchase, unfortunately. Here are a few Yakut knives we have found out on Amazon US. 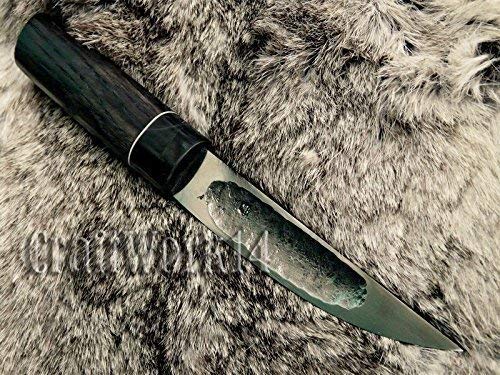 A conventional Yakut knife is specially honed and optimized for slicing push cuts. It is usually seen cutting wavy flesh bands of the frozen Coregonus fish to make a traditional Yakutian dish, Stroganina. This dish can also be made using fresh mare’s frozen milk or reindeer meat.

This is typically where the fuller plays its role. Apart from making the blade lighter while rendering a good handle balance, the fuller significantly reduces the outer contact surface due to which making slices become easier.

This also makes the tool a good wood planer that can easily make pull as well as push cuts. Making pull cuts involve the flat bevel that is exposed to the cut surface. Nevertheless, to avoid having fairly flat wood shaves, it is necessary to tilt the blade.

On the flip side, the asymmetrical grind is not so supportive of making pull cuts without the flat side exposed to wood or while cutting wooden shaves. This is perhaps due to the little material at the rear of the edge and lack of sufficient mass to split fibers by using only its unique geometry. 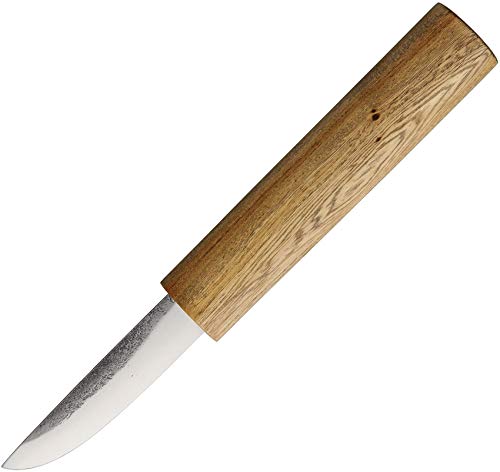 A Yakutian knife is a Siberian equivalent of the Finnish puukko, Norwegian tollekniv, and the Swedish brukskniv. Unlike these counterparts, the knife is considered as a special tool in preparing fish and meat as well as in processing wood as a woodworking knife.

The credit for this specialty goes to its geometry having a blend of concave and convex designs. Interestingly, there are a couple of legends regarding the origination of this geometry.

While the source of origin is unclear, many theories exist although they are mostly tentative, as most of the old know-how of this knife was lost at the time of the socialist rule. It was only in the late 20th century that the Yakuts themselves started to examine it.

According to one of the doubtful theories, the asymmetrical blade of this knife is a steel form of the primitive bone knives. This is based on the notion that splitting a long bone towards the outer side shall result in convex; whereas, the inner part shall be hollow after removing the marrow.

This anthropological theory reveals that the Yakut nomads who knew how to forge steel embraced the unique geometry from the Evenks who are considered the cousins of the North American natives. Evenks did not know about forging steel due to which they used animal bones. Thus, the knife’s geometry is believed to come from bone knives’ concave and convex geometry.

Another common legend says that the smiths gained the art of forging this tool from the gods of the Hell. One more arguable theory specifies that the unique geometry was designed for performance as well as for less steel use per blade.

It is possible to save steel a bit by forging the fuller. However, experts argue that this is less likely to be the primary reason. Rather, the geometry is such because of some pre-determined purpose.

Practically, a Yakut knife is a tool of three components namely, an asymmetrical blade, a monolithic wooden handle, and a sheath of leather. The asymmetrical blade typically has a left convex bevel and a flat one to its right, exhibiting a fuller.

The north Yakut knives feature a more tapered blade, unlike those of the southern ones having a bit broad blade. The side-stitched sheath is made using cow tail hide, accommodates the knife halfway until the handle, and features a wooden liner.

There are a few salient features of a Yakutian knife due to which it is considered as the ultimate bushcraft tool. Let’s explore them.

A Yakutian knife is a traditional tool of Yakuts, which is an indigenous group from Yakutia or the Sakha Republic in Siberia and far east Russia. Although an icon of ethnic culture, tradition, and history; this knife has striking functional characteristics that make it a versatile tool apart from an ideal bushcraft tool.

Its amazing concave or convex design, alleged to be inherited from the primitive bone knives made by the Siberian aboriginals, sets it apart from all the knives on the planet. The extreme fuller makes the blade concave on one side, while the other side is sharp and is an arch to develop a convex shape.

Available in different shapes and sizes to suit both the left- and right-handed users, the knife’s extreme fuller on one side makes it a distinct bushcraft tool. For a left-handed user, the knife has fuller on the blade’s left side and a convex shape on its right.

The knife is an effective, durable, and versatile choice for most survival tasks. Yakutian knife is a durable survival tool that is rugged and functional even in extremely cold conditions. It is truly an ideal adventure buddy!