Skip to content
(This site is reader-supported and we earn commissions if you purchase products from retailers after clicking on a link from our site.)

A ballistic knife refers to a knife having a removable blade that you tend to eject from its handle via a spring-based system. The ejection reaches several yards once you use a lever on the handle or press a trigger.

The blade resides in the hollow handle and remains locked. A spring inside the handle propels the blade when a trigger is pressed. Ballistic knives are ideal for use during an adventurous trip. For many, it is an essential tool for use in the outdoors.

This post aims to give you more information about what a ballistic knife is, how it came into being, and whether it is legal to use it or not.

A ballistic knife is different from other knives. This is because it is a hybrid tool. While most people believe it to be a firearm, its spring-assisted version is not.

Its handle is a hollow tube inside which a spring that is double the handle’s length is packed inside when not compressed. Once locked, the spring is held by the blade.

There is a micro lever or a switch that you can quickly flip using your thumb (not really like the usual flipper knives). Until the blade is locked well, the tool is like a standard knife. You can use it to cut or slash without any hassles.

Some ballistic knives use gas propulsion or compressed air to gain more power while at work. These forms of ballistic knives are more destructive than their other forms and do not witness any spring fatigue with time. However, as the projectile blade has no gyroscopic or aerodynamic stabilization, it is likely to tumble often after covering a short distance.

A spring-based ballistic knife is relatively less noisy than its firearm form. However, it lacks precision at a distance. When the range to be covered is more prolonged, a throwing knife is yet an ideal tool to eliminate a troop silently.

Unlike other versions designed in different other nations, the Russian ballistic knife does not need explosives or gunpowder for firing the blade. You can reload the blade by gliding it into the spring till it locks itself.

The Russian version features a metal tube and a robust spring to adopt the blade. The deployed blade stays attached to the handle, which facilitates its use as an Out The Front (OTF) knife that is an automatic knife.

It also allows releasing the blade from the handle as a projectile by pulling a pin or using a button. The spring is so powerful that it propels the blade approximately 20 feet. If used with an overhand throwing motion, this knife penetrates garbs and flesh.

Even today, many consider it as a special weapon weighing under one lbs., measuring 5-10 inches in length, and working on a spring mechanism. Its spring-propelled version can fire the blade to around 5 meters at 39 mph. 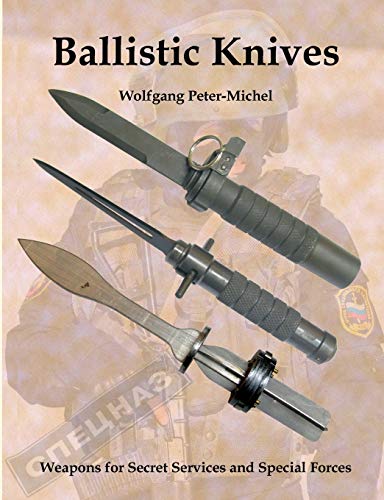 It is said that this knife was the Spetsnaz’s special weapon. Spetsnaz refers to a Russian special force. Ostblock, a Russian company, made ballistic knives and were provided in big numbers to the Spetsnaz force groups throughout the 1980s. Unlicensed copies of these knives emerged in the early 1980s in the United States.

This knife is a tool consisting of a hybrid blade and a projectile. The former can be fired via a single button push, after which it travels for around 5m at a speed of 40mph. This was useful when a Spetsnaz soldier was unable to chase the foes.

Through training, a fighter learned how to fire the knife while grabbing it as a tool to stab with. This gave an impression to the gullible enemy that the distance is safe while out of arm’s reach. The blade flying from the knife would then strike with enough force at 15 feet to pierce clothing and light shields.

Ballistic knives were formerly meant for the soviet military planners who use them for improving their training for teaching the skill of throwing a knife to new Spetsnaz trainees. Due to vast numbers of people being recruited into the army, there was limited training time available even for the elite forces.

Learning to throw a knife required several hours of practice and training. However, it was relatively simple to design and use a ballistic knife. At the same time, much less practice was needed in learning the skill of throwing using this knife than what was required to throw by hand.

The main benefit was the surprise part. The blade was capable of remaining attached to the handle for use as an ordinary fixed-blade combat knife or ejecting as a projectile by pressing a button or using a pin.

Although easier to learn than throwing a knife, the vibrating shock due to releasing the expanding spring and absence of a sighting mechanism resulted in imprecision. Thus, it was wise to target a close range within a few feet to make sure that the blade transmitted a killing blow.

If someone would get hit in the face, the strike would still occur with enough force to upset the target even if the blade would meander in the air. This one second is enough for the Spetsnaz to counteract the enemy by another means.

However, according to some online posts, it is a myth to believe that ballistic knives were developed for the special forces of Russia. This myth is widespread in western countries.

However, as per knifeup.com, a genuine Spetsnaz knife was not a ballistic knife. This means that these special units never used the ballistic knives. They used the NRS-2 knife that has an integrated firearm in its handle.

It is said that the ballistic knives designed in Russia were built in provisional conditions. By 1985, spring-assisted ballistic knives were promoted for sale in the U.S. through different publications. In 1986, however, these knives were finally banned across the country.

I guarantee you, there is no way you can acquire a genuine ballistic knife online unless you want to break the law in the US and in most countries in the world. You may be able to find someone anonymous person selling these knives on the dark web though.

If you really want one, make one yourself or ask someone to make it for you. Please check your local law before doing that.

There is a tutorial on Instructables by dsirotic , if you are interested in making one.

You can use a ballistic knife to protect yourself from any threat. It is reliable for cutting the branches on your way too. As the Russian form of the ballistic knife works on the spring mechanism, it is much quiet in operation.

This can be one reason why many articles online say that the Spetsnaz troops have used this knife. It could be possible that they also had mastered the art of firing a knife along with the art of throwing a knife. Many sources tend to speculate that these troops Spetsnaz were trained to use the weapon but have hardly used it.

The major use of a ballistic knife is when a firearm is unsuitable. It is utilized as a secret or stealth tool. Yes, it is designed to act as a covert projectile in specific situations.

Still, one can use this knife as a knife without any requirement of firing the blade. Overall, the blade is still sharp as well as lethal as any other normal knife.

The Legal Ban on Ballistic Knives

The soviet training doctrine accentuated using a thrown knife as a silent tool for killing or debilitating an unsuspecting adversary at beyond dealing distance. A ballistic knife seemed to fit in that doctrine. Further, along with spring, air, or gas, the blade can also be propelled using an explosive charge.

Thus, the spring-assisted ballistic knives quickly gained dishonor during the mid-1980s in the United States. This happened after the promotion of commercial examples for sale.

Since then, selling and marketing these knives to the citizens are regulated or prohibited legally in many nations. After hearing the yet-to-confirm testimony from a witness according to whom ballistic knives can be utilized to defeat body armor of policemen, the Senator of New York of those days presented the Ballistic Knife Prohibition Act.

According to this bill, possessing or selling ballistic knives is prohibited. However, the bill was not passed.

Later, the support of Senators of Arizona and South Carolina quickly raised the need for a ban on possession as well as on the import of ballistic knives. In 1986, the senators supporting this ban affixed their bill to the famous legislation meant for eliminating drug crops and stopping international drug trafficking tasks.

Finally, the bill became a law. The new federal act banned the possession and importation of ballistic knives in regional trade and commerce.

Just as the standard automatic knives, the current federal law considers illegal to have, sell, make, or import ballistic knives featuring a spring-operated blade that are a part of interstate commerce.

According to federal law, it is another crime to have or use a ballistic knife at the time of committing a crime of violence. The consequence is imprisonment of at least five years.

However, the law does not forbid the sale, manufacture, or possession of a ballistic knife within the borders of a state. While this is good news for those who want to try ballistic knives, it does not rule out the need to check out the specific laws of each state.

Before even touching a ballistic knife, it is wise to go through the local laws and determine whether it is legal to have, sell, or make these knives in the specified state. Several states regulate or prohibit the possession or procurement of these knives for which penalties differ from one state to another.

Just as the law made for switchblades, or OTF knives an exception exists. Selling ballistic knives to the armed forces of the U.S as per the limits of a contract is legal. It is also permitted to possess these knives by the authorized members of these forces for performing their duties.

You may read more on the legal aspects of ballistic knives here. Make sure to check your state’s knife laws before buying anything you might find questionable.

A ballistic knife is like a pistol, with the only difference being the way it works. It ejects a blade rather than a bullet using a spring action, air compression, or gas pressure.

Ballistic knives are critically regulated for the citizens of the United States. However, armed forces can use them for their duties. It is still illegal to use, make, or import these knives throughout the vast territory of the United States of America.

These knives may be available online for sale. However, before buying it, it is necessary to peep into the local regulations.