Zenitsu sword of Demon Slayer is known for its unique properties of changing the color as per the holder and killing night demons. Demon Slayer: Kimetsu no Yaiba is one of the most famous and biggest anime TV series. In this Japanese manga series, the hypothetical world is filled with demons and their killers or slayers.

Slayers come from the Demon Slayer Corps, an institution set to defend Japan from the demons. This organization has been there since ancient times, committing itself to the protection of mankind from demons.

Each demon killer has a distinct sword forged using an uncommon ore blessed with the power of absorbing sunlight. Obviously, the sunlight is the main weakness of nocturnal demons.

One of the popular sword holders, demon slayers, and protagonists is Zenitsu Agatsuma. Regarded as the apprentice of Jigoro Kuwajima (a past Pillar), he travels with Tanjiro Kamado and his sister Nezuko Kamado to kill the demons.

Tanjiro Kamado is a primary demon slayer who is hunting for the demon who killed his family and made his sister a demon. While the special sword of Tanjiro is black, the Zenitsu sword is yellow. Both of them, along with other swords used in the series, are known as Nichirin blades.

They are known to take a distinctive color when their owners drag them out first. Thus, they are also called The Color Changing Swords. Nevertheless, the holder must possess some skill based on which the blade changes to a specific color when taken out.

The yellow Zenitsu blade symbolizes thunder. While the character is known to have low self-esteem and is infamous for being a coward, he never fails to show his true power when the situation is unfavorable. At the pace of lightning, his real strength gets demonstrated surprisingly as thunder itself.

As Nichirin blades tend to change as per the user, each of them is distinguished as unique. Zenitsu’s blade is distinct in the sense that its coloration is not a solid band but a lightning motif across the blade’s length. The reason for this show-up is unidentified.

Interestingly, Zenitsu can perform only a single move under the first style of Lightning Breath. This style is Thunderclap Flash that he has mastered such that he can frequently splash up to eight times in a single use.

A Nichirin blade designed for killing demons is made using a special ore that takes in sunlight incessantly. This makes it one of two ways to kill a demon by cutting his neck bone.

It is made using scarlet crimson iron sand as well as its ore extracted from the high mountains, like the one on Mt. Yoko. A Demon Slayer protagonist is allowed to opt for an ore after successively undergoing the Final Selection.

A Nichirin blade has a tsuba (called so in Japanese) or a handguard shielding the holder from cutting herself or himself. It is present where the blade and the handle intersect. It is also true that some protagonists removed the handguard from their swords.

The Zenitsu sword has a handguard in the form of a round with a golden rim and four minor indentations. The middle reflects a silver shade with petite triangles. Overall, it is a clover-type four-leaf tsuba.

This sword is purely a standard katana with white whirlwind streaks along the edge of the blade. This is unlike the other Nichirin blades having a solid color. The character is known to carry a white scabbard in which he keeps his sword.

Following are the top two Zenitsu sword replicas for cosplay: 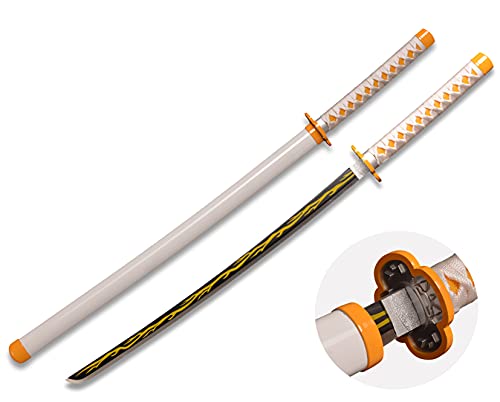 This Zenitsu sword is a newcomer as a short sword rather than a long katana. This means that it is more convenient to use it and carry it, even if the user is a kid. Indeed, it is a kid-friendly sword, as its blade is not sharp.

The blade is made using stainless steel, not carbon steel, which means it is likely to last longer than expected. It is also durable enough to not break or rust. This makes the blade free of maintenance. The scabbard is made up of aluminum, which is not as durable as the blade.

The handle is draped in a cotton rope that is known to absorb sweat while rendering a better feel at the time of holding. The appearance reflects the flawless workmanship that must have strived to make every detail look like the original. 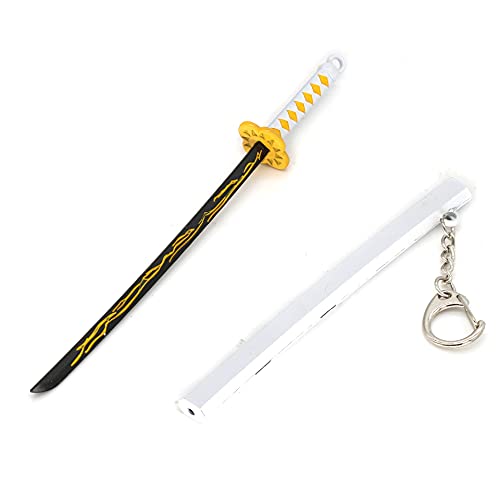 Even this Zenitsu sword is a newcomer but has a unique twist in the sense that its scabbard comes with a keychain. This makes it more functional than the aforementioned one, as you can also easily hang the sword when not in use.

The sword is made using zinc alloy of high quality, which means it will last long. Due to zinc, this Nichirin blade is rustproof and resistant to corrosion. The scabbard is white and it easily covers the blade reflecting the original lightning pattern.

The handle is also made up of zinc and has small yellow kit patterns to reflect the original look and feel.

Instead of buying, if you wish to design a Zenitsu sword, do go through this video.